on September 17, 2011
Way, way down this blog somewhere is a shot of all the techno-colour PS Vita models that probably won't hit the stores. However, the white one is more likely, I think that was the first alternative PSP colour model, before all the blues and red ones turned up.

UPDATE: The for-real white PS Vita is finally being released in Japan, check here for details. And in the west, it will come bundled with the Vita's Assassin's Creed III game at the end of October 2012. 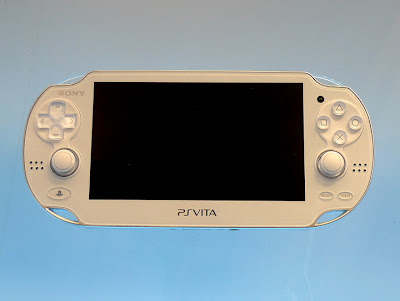 Anyway, someone took a decent pic of it and posted it on Twitter, and it looks pretty neat. Personally I prefer black for my gadgets, but white just adds a slight futuristic touch. However, with the trend for those PS Vita screen protector skins/desktop backgrounds, the basic colour could soon be an afterthought.