Nelke... Ateliers of the New World managed to squeak into No. 16 on the latest Media Create chart for Vita. It put up just over half the sales of the Switch version and less than a quarter of the PS4 editions, showing just how far things have fallen both for the Vita and the Atelier series.

That's a far cry from the likes of Atelier Sophie that managed this type of solid performance, back in 2015.

Vita hardware sales were down a couple of hundred over recent weeks, I still think Sony is eeking out the last stocks, with production already done. I did ask Sony UK for some detail on what was happening with end of life hardware in Japan, but they never got back to me. 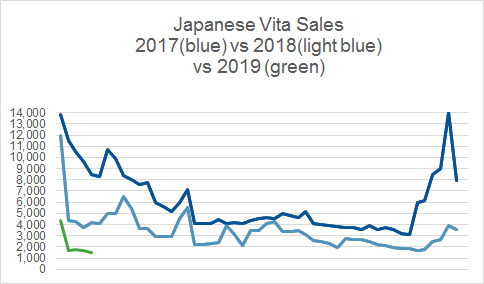 Looking forward and across to the other big publisher, Famitsu's latest scores are out, with decent ratings for the Vita's next couple of outings.