on December 31, 2017
We made it, thanks to developers small and large, with ambition and desire, the Vita had a pretty darn good 2017 and is looking remarkably strong into 2018 with around 100 games still on the release list. 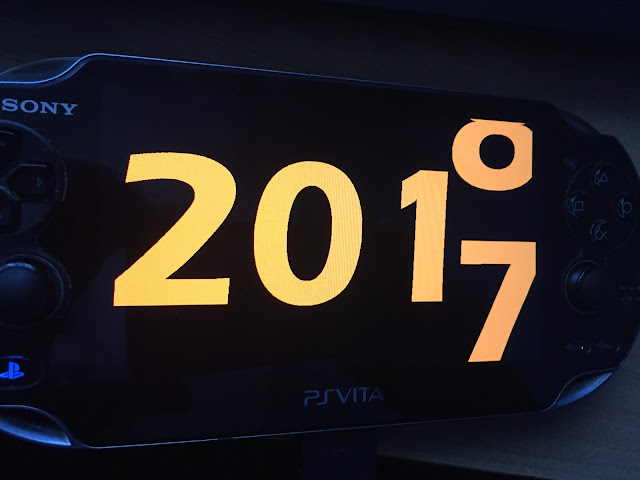 The news that Catherine is coming to Vita caused outage and apoplexy among some gamers, but shows just how much Japanese publishers admire the machine's longevity and place in the market. This strong Japanese translated line-up and growing smaller developer interest, physical collectables and strong retro vibe make the Vita a good place to be.

So, to 2018 and there are several questions to ponder:

Is Vita be powerful enough for low-poly games? There are lots of titles out like Morphite in development, but ports seem to be struggling to get over. Either someone needs to craft a Vita-focused engine, or a clever coder needs to show that ports are possible. If so, that's a healthy raft of new PC and mobile games that could come our way. Full on FPS titles like Killzone prove it has the power, but getting small indes to harness it through generic engines is a different matter.

Will Sony budge on firmware/apps/games? There's so much Sony could do to improve the Vita's lot in life, with only small tweaks needed. An update to the Bluetooth stack would help Vita run with more headphones and sound systems.

Updating the Twitter app to the new character count would help, while making it easier to auto-post screenshots, or refine the cludgy photo-copying nightmare would improve shareability. None of this takes much effort and would show a little love that only updates firmware to clamp down on hack exploits. Netflix for Europe, please, anyone?

Also, why on earth isn't there an indie-hits bundle on western shelves? Sony is in the business of making money, and even a small production run would generate interest, help sales and encourage more games.

The bigger question is games, is it really too much for Sony to divert some development effort to small but fun Vita games to help jolly the ecosystem along, create some buzz and help attract more developers? Talking of...

Who's new to the party?

A lot of people are putting in major effort to work on the Vita, but we can't rely on their grace for long. While PlayStation Mobile was running, a decent number of people learned to code on the Vita, and gave us a fun bunch of games, some of which have returned as fully-fledged Vita titles. A developer-friendly relaunch might be one way to attract future talent, and help patch over the fact that most dev tools have dropped Vita support in their latest versions.

I see signs of developers interested in Vita, but there really needs to be a consolidated point of effort to make things happen (as when ROM 2064 devs crapped miracles to get it on Vita).

The bigger problem for Sony, Vita 2 or nothing?

Sony has no clue how the Vita is still going, and the company's clueless executives probably wince every time Vita gets mentioned. At home in Japan where the PS4 continues to get pummelled by the Switch (aka the Vita 2 that Sony should have launched), things must be pretty grim - Sony can't launch a PS4 Pro+ or a PS5 yet, while the huge gap in the market for a Vita 2 is being rapidly filled by massive Switch sales figures.

So, Sony is out for the count, richer thanks to PS4 after years of losses, but unable to address the problem that a Vita 2 would fill. Which leaves our little box of aging hardware to do battle against the world into 2018. Handily the growing success of indies and niche titles means it can fight so far above its weight that it is almost unimaginable. With games focused on the Spectrum, MegaDrive, C64, 16-bit and other eras hugely in vogue, the Vita can handle these easily, and as long as developers report some sales success it will remain a tempting port or development target.

What do you want to see in 2018? Let people know in the comments or on Twitter!
apps catherine japan low-poly mobile ps vita sony twitter vita games 2018