on July 12, 2013
My heart sinks with this news, as the continual battle between official firmware and hackers is likely to be kicked into high gear on the Vita.

Yet another hacker/chancer "Dong Lu" is claiming to have hacked the Vita, offering jailbreakers the chance to play pirate Vita games, or just some spam, or a virus. Since the site has already been taken down, I guess there's no harm in showing the video (which has also been flagged (by me), so may vanish at some point). It claims to offer a quick two minute download that will open up the Vita to play free Vita and PSP games.

I'm sure the exploit, if real, will emerge in hacker circles soon enough. But, eventually a heavily promoted jailbreak is likely to appear, and with the Vita on a profit knife-edge as it is, Sony needs to be able to kill it quickly, as mass piracy would kill off developer interest in a heartbeat with so many other devices to code for.

That'd be a great shame as Sony has courted all those indies to the fold with games that hardly break the bank. Here's a couple of pics if the video does vanish. It showed no detail on what the exploit or hack is, even so, expect a firmware update pretty quickly if there is a genuine risk to the Vita's security. If you do want an open gaming system, buy an Android or a Ouya and one of the compatible gaming controllers! 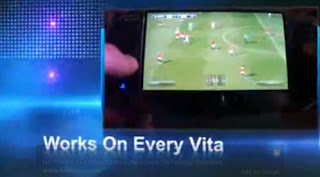