on June 05, 2012
Since EA, then Ubisoft pretty much ignored their much-promised Vita content, the only logical assumption is that it will all appear in Sony's own E3 event coming up in mere minutes, you can watch it live here. Any Vita news will appear below the video.

2AM UK Time (you can't say I'm not dedicated). Here we go... commence montage (how original).

Jack Tretton gives Kaz Hirai a nod, and thanks gamers - cheers man, get on with it

First up David Cage of Quantic Dream with the next game after Heavy Rain (unlikely to be a Vita game). It is called Beyond: Two Souls and deals with life beyond this one.

On a lighter note, next up is All Stars Battle Royale, definitely coming to PS Vita and cross compatible with the PS3 edition. Shown off with two Vita players going up against two PS3 users. Shame the demo commentator was wittering on about level x super moves all the time. 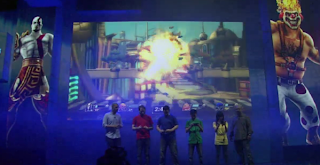 Note, the guy on the Vita won the match! Two new characters will be unveiled, Nathan Drake and what looked like a Bioshock Big Daddy.

2:30AM PS One classics coming to Vita this summer, plus more media services like Crackle.

Call of Duty: Black Ops Declassified coming to PS Vita this fall from Activision. No pics or video, but stay tuned. Wonder which of Raven, Treyarch or Sledgehammer will be working on it?

Then Assassin's Creed III: Liberation with Near functions. The game will come in a Vita Bundle with the white model on October 30.

Two games mentioned but very little footage, wondering how badly on the back foot Sony's third party developers are here?

And that was it, 90 minutes in which three Vita games were shown, briefly. Clearly Sony doesn't have much of a clue about its handheld strategy.
all stars battle royale beyond Call of Duty: Black Ops Declassified crossplay e3 live playstation ps one ps vita quantic dream sony