Play Magazine trolling or inspired about GTA V on the Vita?

on April 12, 2012
Play Magazine, written by respected game journo-types isn't the sort of place you'd expect to find troll-worthy material, but the big headline on its latest issue states "GTA V on Vita." It then rapidly qualifies that statement with "Industry insiders leak the full story." 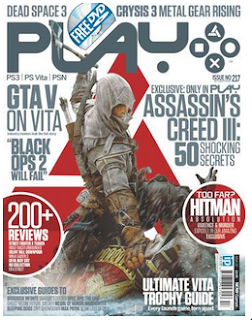 Haven't read the magazine yet (haven't brought it since about 2008), but having seen so many anonymous quotes fail to come to fruition over the years, and knowing that GTA V on the Vita would only come out a year or so after the PS3 version, I'm pretty sure there isn't a straightforward yes or no answer to this one. In fact, GTA V Liberty City Stories in 2014 is probably the closest bet to a real answer.

Why would a "proper" mag take this feature on? Given it has barely ever mentioned the Vita on its recent covers, I suspect, like most magazines, it is getting desperate for readers, with sales down to 21,000 a month in early 2011 and no figure released this year (down from highs pushing 100,000). A shame but part of the inevitable slide in paper-mags. Does it have a website, I don't even know.

UPDATE: NowGamer - the publisher's home games site - mentions /shudder/ Michael Pachter /shudder/ as one source for the article. I think we need say no more, and ignore this until the very day a boxed copy appears in a shop (as if).