on September 07, 2011
Having basked in the gorgeous box art from the Japanese edition of the game and downloaded the latest batch of Japanese demos, I took some time to enjoy the sights and sounds of Type-0. 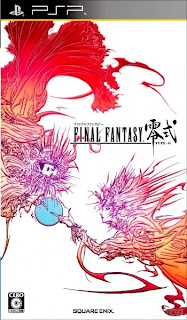 This acts as a rough guide if you want to give it a go. I'll keep the description to a minimum so you can discover the world for yourself. Start the game and run through the red barrier and out the door, down the path and into the other building.

The smaller girl inside acts as a shop for potions and the red crystal let's you swap around characters and skills, with the bottom two menu options for save and load. Not sure what the taller woman wants. Talk to the Moogle by the chairs and table to go on training missions. The top one is combat training in the forest.

The missions show which buttons to use as you learn to fight. Triangle is for physical attacks (swords, pistols), X is roll and the others perform various magical attacks. Right should button locks on the target. You can swap people in and out of the action using the left shoulder button and up arrow, then select a new member.

Hold down Triangle and Circle together to bring on the spirits (looks like we're limited to Shiva or Golem in the demo) who are the fun elements in combat. When you finish combat training, talk to the Moogle again. The second mission sends you off to a new location. You need to organise your party and combat team before starting out.

In the city, the combat happens in real-time. So be ready to fight quickly. Swap new characters in, if you like and follow the fairly linear path. Take a breather between battles to let your strength recover. To pause the game, press Start and select the first option that's highlighted, pressing Start won't stop the action. Around a few corners is your first real opposition, a wall-climbing, rocket-lobbing robot. Use the barriers as defences and choose party members with ranged attacks, Queen works quite well.

Look for an entrance on the right to duck into and you can lure the robot closer. When you get to venture further into the building, there is a load and save point and, upstairs, an angry gorilla-type thing to fight. A little beyond that is a huge four-legged demon. Best turn into Shiva or Golem to get rid of this.

On the roof tops there's a cut scene to enjoy before the level ends. But, Start again and there are more Moogles to talk to and get some more missions from with new places to explore, they follow pretty much the same pattern as the first. Keep an eye on the radar for objectives and bigger targets. That's about it, look forward to playing it in English so I know what the hell is going on.
demo guide final fantasy final fantasy type-0 square enix