on February 27, 2019
Hello, a 3D game on the Vita! Although as a puzzle game, Access Denied is hardly stretching the hardware. A series of 36 locked-box puzzles face the player, spinning each mystery device around with the triggers to get a better look at the complex designs of each physical puzzle.

Some have buttons or sliders, others have their own controls, number pads or sigils and hidden clues, often requiring some zooming in or out (triangle and square) to find the key details to solve the puzzle. Each one comes out of a mysterious lift on a desk that has various tools scattered around it, along with a clock showing the actual time. 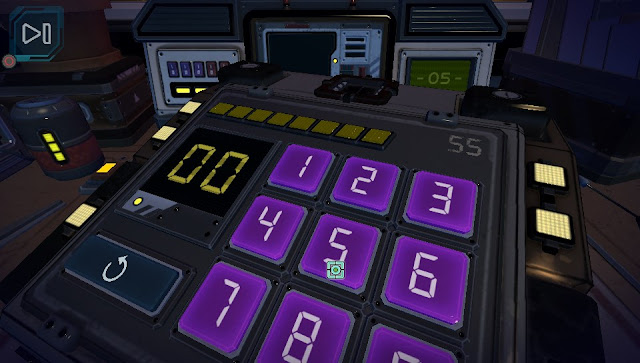 Judging by the constant dripping, its either raining or there's a leak somewhere, and is that a storm rumbling in the background? While that helps create an atmosphere, there's no explanation or background as to why we're doing all this.

Most of the puzzles are pretty straightforward after some tentative stabs at what each one does. Understanding what you need to do can take a few minutes and sometimes the controls aren't particularly intuitive, adding an extra layer of angst. The further you go, there are puzzles on multiple faces of the object, some of which you need to constantly move between to work out a solution.

Beyond that, there's not a huge amount to say about the game, all we have is a no-nonsense puzzler that's nicely dressed up, but with none of the speed challenge of Squares or the quirkiness of Open Me! There's no different solutions or different ways to play, but I'd say you might just about get your money's worth.