The new map has four puzzles to solve behind gates, so some block juggling required. I'm going left to right on the triggers.

Colder than ice: Collect the potions and create a clone on your side of the water. Freeze the clone (you cruel bastard) and shove it into the water in front of the fourth from left block. Push that block up, then move the fifth block down across your popsicle bridge onto a trigger. Push the second block into the water and move blocks one and three onto triggers. Now push the high block onto its trigger to open the gate. Collect the clock and get out of there. 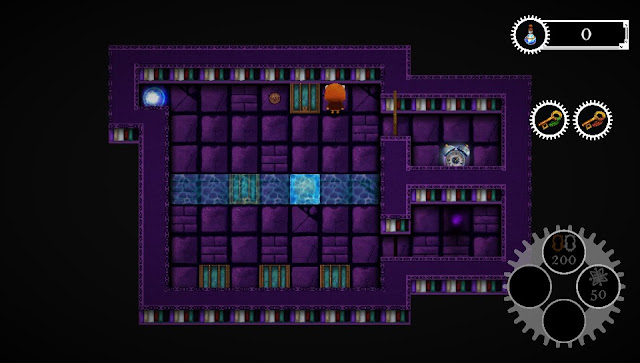 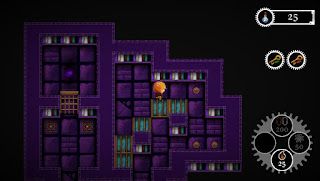 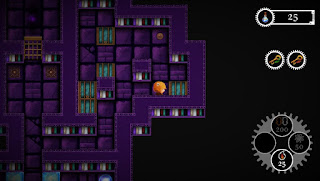 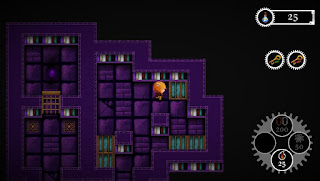 This will drop gates in front of the lightning orbs so you can push the clone popsicles up to the triggers above their current location to gain access to the portal. Go down to the lower section, use the fireball to shoot both blocks at once, then trigger then green orb to open the gate, get the clock and leave.

Falling apart: Get the potion to your right, hit the trigger and go up then left to avoid the green ball, then right and down to avoid the second shot. Get the next potion, move the two blocks to create some space and get the clock. Shoot the ghost to get out.

Ice of the beholder: The key here is to freeze the four ghosts and put their blocks on the triggers, easier said than done, judicious use of the back button is likely. Get the two potions and then the clock to trigger the ghosts. Shoot the nearest one near the top but with enough room to walk above it.

Push him right a block and a half  to block the next two, then sneak past the last one. Time your raid on the other potions as the door is rising to get through both ways unharmed. The tricky bit is shooting the remaining three with enough wiggle room to get them on the triggers. 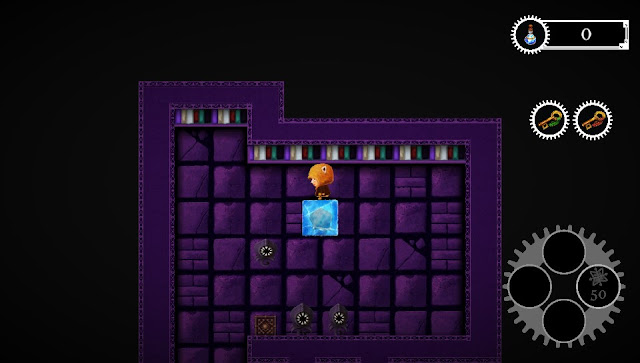 Back in the portal room, grab the key and go through the left portal to open the gate. You need to run all the way back to the other portal to get to that side of the room (go on, I'll wait!). The route is back, across, across the ice (not the nearby down portal), then pick the lower portal in the green level and the lower portal again.

Time and time again: Some back and forth is required for the first four blocks to get them on their triggers. Push the top one, one square left, go around it and push it right. Push the middle square down and onto the lower trigger, move the left block up so you can get the remaining one down, and then replace the higher two...

For the second part, get the potions and read the note. Press circle, then push the higher and lower blocks right and the middle one down to reach the X. Trigger the clock and push the block through the portal to escape.

Time flies: Collect the potion, then put half your butt in front of the right-hand green bolt to stop it shutting the gate. Tap circle at that point. Sneak through quickly and shoot the block above so you can position the three remaining ones on the triggers. When you get the clock, move to the gate, and reverse time, duck through and out the portal.

Been there, done that: Collect the big potion, press circle. Push the top block up, collect the potion, then create a clone in the corner. Go to the lower block, push it and get the potion. Press circle again. Push the two blocks and use the clone to cover the triggers, collect the clock and exit.

Let's do that again: Down, left, fireball, push right, collect potions. Go up and around the block, press circle. Push it off its trigger and down where you came from, go around it again and push it up to block the lightning to the left, so you can get above it. Press circle again to return it to its start position and open the gate. Get the clock, and pull the other block down and out to block the downward lighting. Move the other block over to open the portal gate and move the other block to protect against the right lightning bolts, then sneak out.

Flowing like a river: Collect the potions and juggle the four blocks above with a couple of pulls on the third-from-left block to get them on the triggers. Then stand by the lower block and press circle before showing it across the ice to complete the path. On the other side, press circle again to open the last gate, get the clock and push the block back to recomplete the path. Shoot the block you moved at the end of the slide to allow access to the portal.

Forward to the past: Have a cup of tea or coffee, we'll be here a while. Figure out how to put the four blocks on the triggers. But, before you do that, shove them all the way over to block the ghost in his square. Do this carefully, so there's room to maneuver the blocks back and forth. When in position, press circle. Then move them all back again to the triggers to open the gate, and get the clock. Once you're outside the gate, press circle again to return the blocks, trapping the ghost. 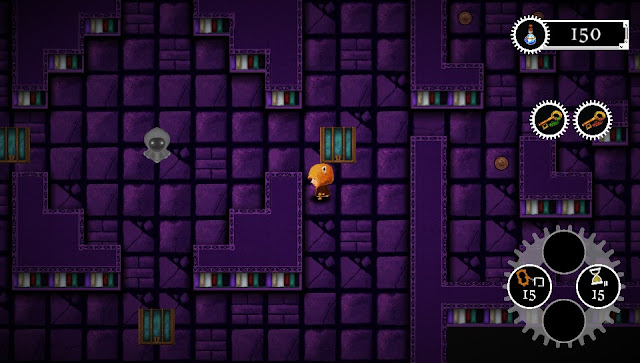 To escape through the portal, push the nearby block half onto the trigger, then pull it off again to open the sequence gates.

That gives us the key, to move some blocks to open the gate to another portal. And onto the final few levels, which I'll write up tomorrow!

So close...: You can't undo on these levels, so caution! Also, there's not clocks to collect. Instead, grab the potions. Move the three blocks onto the triggers, hit circle, then push the middle one up to its destruction. When you're standing above where it was, press circle again. In the second section, moving the blocks is easy enough, but you're one short so make sure that one block covers the two adjoining triggers.

For the final bit, head to the portal. Push the top-left hand block right, then push the lower block down. Now, who's this mysterious person? When they've vanished move up and right to get out the way, press circle to restore the blocks, replace them and enter the portal.

...yet so far: Easy this one. Collect the potion, stand next to the gate and shoot freeze to the right. Hopefully the ghost stops before the trigger, redo if you get stuck. Pull the frozen ghost and the block into the river to let the next ghost move up. Go down the doors. Meet your nemesis, briefly, then pull the next block to open the exit door.

Grab the key, go to the last portal. Time for the last level.

Fountain of youth: This is pretty easy. Avoid the fireballs from your new friend. Grab the two potions in the inner section, and trigger the water power so you can get to the outer level. Use the mini-game keys (you did get them didn't you?) to open the doors and get the potions. Place clones on the two triggers on the right hand side to get more potions, there's another one on the far left-hand side.

Now place three of the four clones on the triggers in front of the lightning orbs. Once in place, keep your main clone or Violet safe, and put the last one in place when our friend is in the firing line.

Plan B: get some potions and go back into the inner section to freeze the villain, before escaping through the portal for a different ending!

Plan C: Quickly urn a clone into a popsicle, push him into the bottom left water hole and the villain should move down into the single cell traps, completing the game the third way. Trophies all round. Not you need to play the game once without hints for one trophy!
Always something else to do been there colder than ice done that falling apart guide ice of the beholder ios ps vita ps4 switch time and time again time flies waking violet walkthrough