on July 18, 2018
Marco Mastropaolo's Waking Violet (review) is a tricky little puzzler with dark overtones, ones that seem to get darker the more you get stuck. Having finished it, I'm going through it again to create this guide, With over 40 levels, there are lots of sections where the solution is less than obvious.

Having waded my way though the game, here's a guide with hints and tips, any questions, comment or tweet me. This was done on the Vita version, but I guess they work for PS4, Switch, PC etc.

Opening level: Push the blocks into the water, use the final block to lock in the ghost, trigger the alarm clock and exit the level. The first portal room has six more puzzles, solved in order of top row first, left to right. 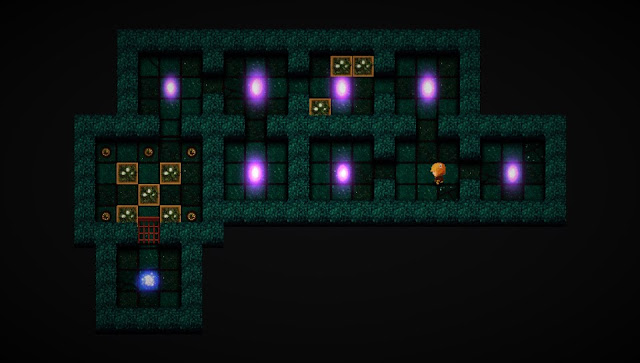 Fire flies: Leave the block protecting you from the lightning. Go round the corner and stand on the trigger to send a fireball down the screen to remove one block, so you can escape later. Then, move the nearest lower block in the pile to the left, then push up, move the block on your right to the square in front of the trigger.

Use the right stick to get a full view of the map. Collect the alarm clock and then immediately push the nearby block left to stop the ghost getting you. Trigger the fireball when the ghost is in front of the launcher. Push the block up to exit the level.

Rekindling old flames: Arrange the three squares to your left around the lightning orb to stop it shooting.  Read the note and follow the instructions. Move the lower block to get the clock, shoot the three blocks and shove the last one past the portal to escape. 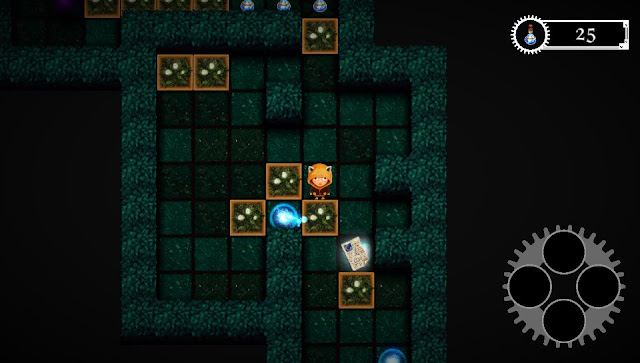 High voltage: This is where the game's clever use of half-brick positioning comes into play. Move the first block to prevent the nearest orb zapping you. Push the second orb right and position it to block both orbs from hitting you (pictured). The rest is simple, align the blocks to avoid the lightning, collect the clock and retrace your steps. 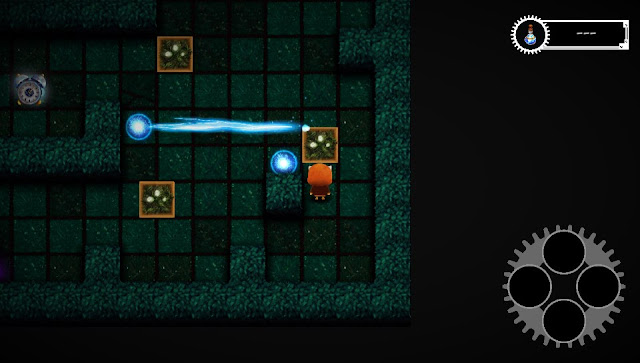 Boolean logic: In room one, place the block on the trigger to open the door. In room two, push the block onto the nearest  trigger to keep door one open. Then move the original block into this room. Put both blocks on the two left hand triggers to open the new door.

Stand next to the blocks obstructing the passage and fireball them out the way. Shoot the blocks to your right first to get enough fireballs to clear the way to the clock, then reverse course and exit, pushing the last block out of the way.

Walking on water: Push the nearest block up to cross the water and get the potion. Push the second block right one, get the potion by the ghost, then push it right again and get the third potion. Fireball the block to open the door below you. Fireball the block at the bottom of the passage, read the note. Move the two blocks to reach the potion. Press square to trigger your water ability and collect the others, the clock and return to dry land.

Trigger the ghost door and walk off it and you should kill the ghost (trophy trigger), repeat a few times until it works. Then exit the level. Collect the key, move the four outer blocks to the four corners and the middle block to up the upper-middle block to open the next door. 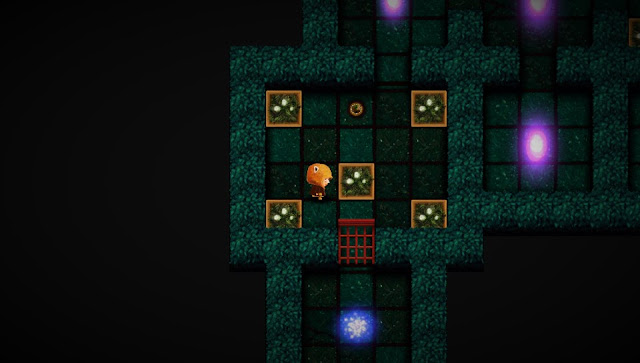 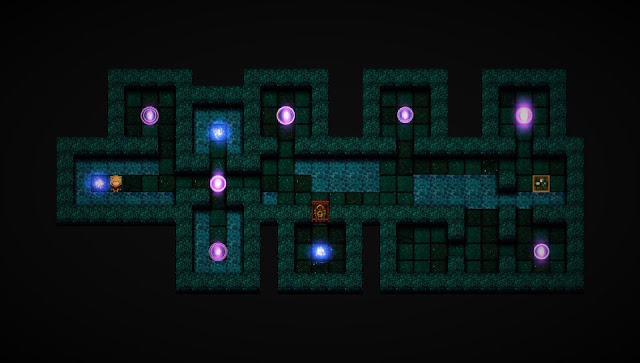 Half-way there: Collect the three potions and shoot the first two blocks. Push the third block down one, but not into the water. The next block, push half-a-step down so it blocks the lightning orb. Make a bridge with the next two blocks and collect the right-hand potion. Now go back a bit and stand to the right of the half-block that protecting you from the first lighting orb. Activate walk-on-water and surf  across to it, push it a half-block to the left, go down and left to push the remaining block down before the time expires. 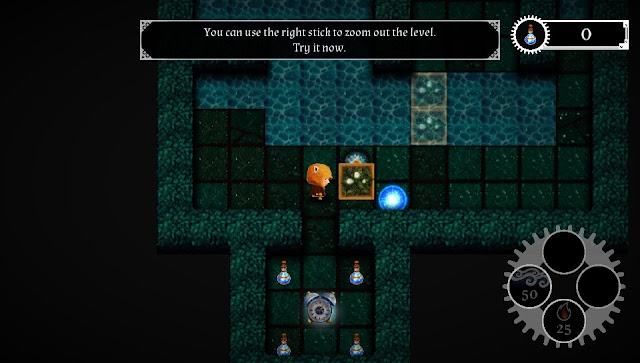 Now push it half a block down to defend against the lower lightning bolt and push it onto the trigger to open the exit gate (pictured). Collect the potions and clock, trigger walk-on-water and quickly make your way to the exit.

Sacrifice: Collect the four potions, shoot the block above the lower potion to get out, move a block to collect two more and use fireballs to get the two pairs of potions. You can ignore the solo potions, as long as you have 200 points. Stand above the clock, collect it and fire a clone down the map. Run up the screen to stay alive until the clone lands, then if the ghosts get you, you switch to the clone, or when you die, you'll automatically move to it.

Poker faces: This looks complicated, but is pretty simple. Collect the potions, shoot the block and create clones down, left, left and up to reach the trigger for the gates. Using the second clone, block off the lightning orb, then move the blocks into the water to create a path. Shoot the block to open the gates again, and then go back to the first clone to collect the clock and return to exit the level. 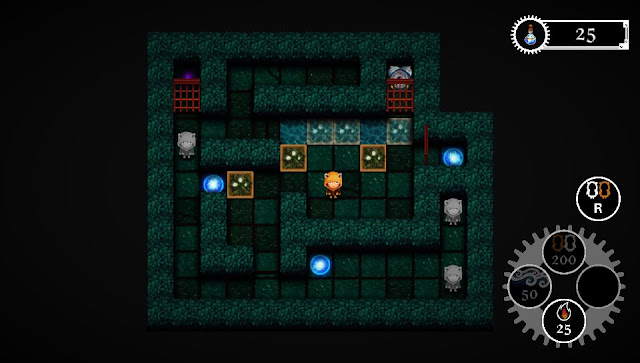 That's enough: Move the upper right block to the right and grab the potion. Push the lower left block down a half and then push the middle block up and left so half of it is on the gate trigger. Collect the clock and use the other two blocks so you can go through the gate. Shoot the block from some where safe and then half-move onto the trigger to fire a green bolt to open the other gate so you can escape.

An "I" in TEAM: Push the first block down, collect the potions you can, then push the block back up and on top of the higher trigger. Push the left block in, shoot the lower block, collect the potions and push the surviving block out and up onto the lower trigger. The clever bit here is now to stand on the middle trigger to open the door and send a clone right across the map. 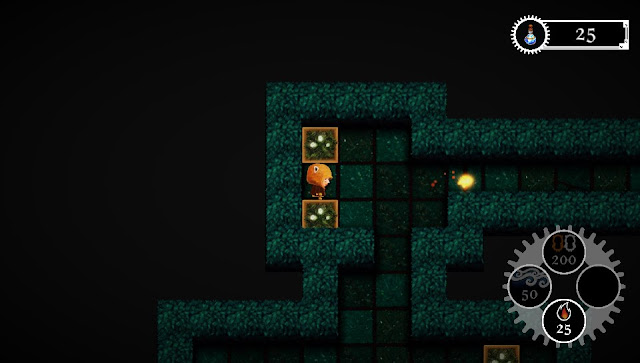 Then step off the trigger, go back down and push the right block in, collect the potions. Push that last block out into the left room and loop back to push it up and onto the middle trigger so you can escape.

Now use some clone teamwork to activate the sets of triggers, using the block where needed to collect the clock and open the exit.

The final bit is weird, I put a new clone in front of the clock gate. Shot the two blocks, then stood on the lower trigger, and once the bolt had passed the upper gate, rushed up to stand on the higher trigger and then grabbed the clock as the middle gate opened with the clone.  There may be a more elegant solution, but I was out of there!