on June 26, 2018
Rainbow Moon was a fiendish slice of RPG fun, still eminently playable today and so crisp its hard to believe that it is five years old. But, time moves on and Rainbow Skies is finally here to take over the mantle with an all-new engine and adventure.

Available on PSN or in EastAsiaSoft's gorgeous limited edition, Straight away, the key and very obvious change is the size of the character graphics, with bags more detail, costumes and weapons that change as you upgrade them. The world also looks more hospitable and charming, with a touch of Oceanhorn about it, if somewhat flatter.

Rainbow Skies is Cross Buy/Save with PS4/PS3, if you want to enjoy the visuals in HD on a big screen, but they do look stunning on an OLED Vita. 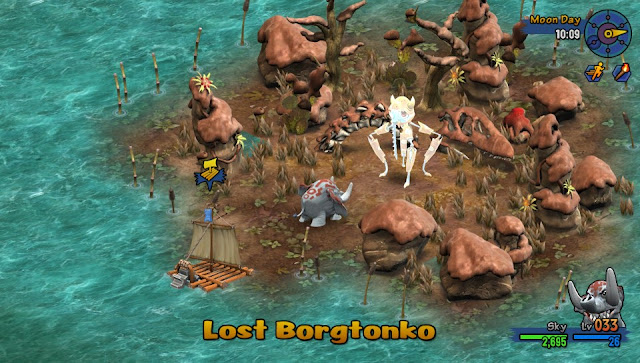 Falling from their cloud-hopping world to the mysterious lands below, Damion and Layne are two keen young warrior types who end up thrust into an adventure that sprawls across the small islands they used to look down on.

The action is strictly classic RPG, with turn-based stages for battles, plenty of quests and side-missions. Rather than building the usual party, Rainbow Skies offers a neat addition in the form of monster raising, as you hatch eggs and then bring your former enemies to fight on your side, deal out healing or act as punishment absorbers.


Battling Through to the Rainbow

As there's so much to like about the game, I'll get the annoyances out the way first. Battles with 20 enemies are no fun, simple! And there's no way to skip to the outcome, if your party is always going to win. Even 10 well-matched opponents can see battles drag out for too long, sapping the fun from the game. Also, the lovely in-battle cut-scenes are gorgeous once or twice, but endlessly repeated, as the skip option doesn't always work - and things drag!

Rainbow Skies is also very old school about commands, there's no "repeat attack," "collect all" or "cure all" button that would speed up progress. I don't mind ditching a few low-end cures if there's no room for them, just get me to the next battle! And there's no Undo if you make a genuine movement mistake that stuffs up your tactical plan!

Later in the game you do get speed boosts and other items to speed your passage, but it really takes some grind to get there. 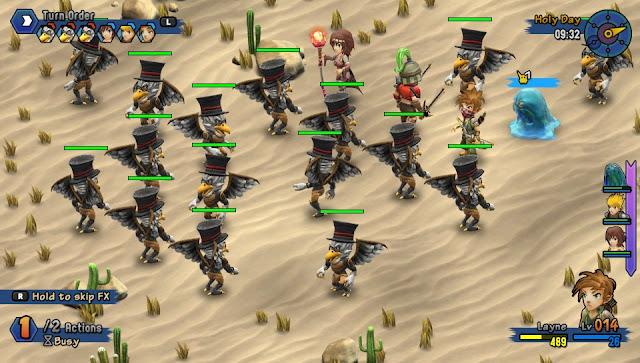 Not bad as such, but certainly over-complicating things, there's also perhaps one or two layers too many in the skills and buffs department. You start with the usual leveling up and weapon adornments plus equipment which is okay.

But, then there's combos, battle ranks, passive skills, battle levels, food levels, different days have different effects, and extra potions among others. I always forget at least one for a while and suddenly have a bunch of decisions to make or have struggled when a simple update would have made life a bit easier.

So, lots of little quirks that may wind you up, but nothing that breaks the game or, apart from minuscule delays (multiplied by the many thousands of times they happen) to delay progress. Fortunately, there's plenty of healers littered around the more challenging areas to keep you moving forward. 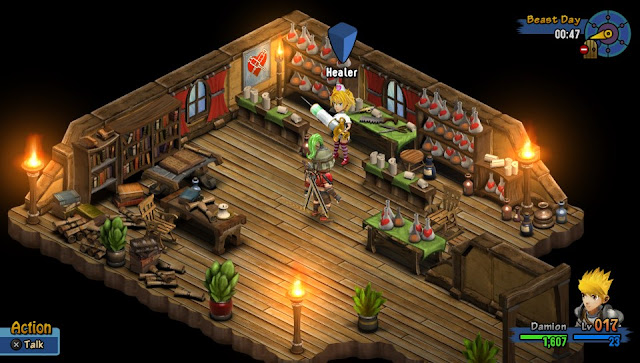 At the Happier End of the Rainbow

Something I also hated at first was the target or movement restrictions on skills, aka you can only throw a rock in a straight line, or heal those very near you. But, over time, you learn some fun tricks to take advantage of, and you can use dropped loot bags to defend your team from the enemy, and line them up for devastation.

Since you spend so much time in battle, minimising damage and turns means you'll focus on the skills that do the widest damage, but with so many to choose from, up to a dozen for each character you can feel you're missing out. The more you use each skill, the more powerful it becomes, so you'll have a few favourites. If they become ineffective against certain classes, you'll need others on standby.

Beyond fighting, there's treasures to dig up, and every place you visit is gorgeous to look at with lots of detail in the towns, fiendish secrets out in the wilds, and hundreds of things you should remember to investigate when you can get past that next mountain pass! Takes notes, as the game's book can bury stuff you want to know! 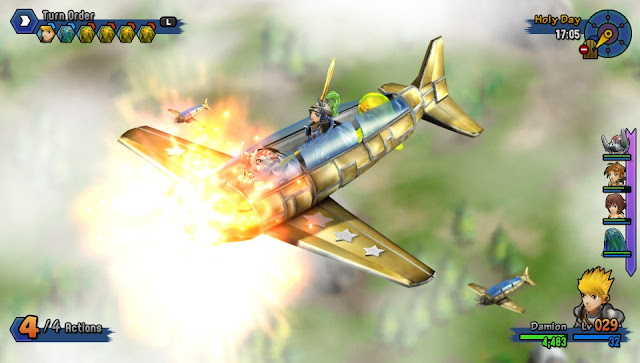 Those aside, there's so much to see and do that you never get bored with Rainbow Skies, meeting some very strange characters, and always finding some new dungeon, house or bit of creepy wood to explore that opens up a fresh secret or quest. Taking to the seas to explore other islands is another example as you progress, trying to get back home while helping out the locals.

Each main quest comes with a bunch of side quests, and most are genuinely fun to explore and take time to uncover the wider world. The game's sense of humour is spot on, from rude radishes to some sardonic NPCs, so there's always something to chuckle about.  Only briefly do you seem to get railroaded down one particular path, but the world soon opens up again with lots more to see, do and kill.