A spring in the step of Vita sales for Japan

on May 02, 2018
Hope everyone in Japan is having a good holiday! In the run-up to Golden Week, Sony managed to shift a few more Vita units in Japan last week. Following up its good financial figures, Sony sold over 4,500 Vita consoles, according to Media Create for a useful little sales spike, in-step with last year's rise.

That was probably helped by the perennial arrive of Jikkyou Powerful Pro Baseball, which sold 125K on PS4 and a healthy 56K on Vita, topping the charts. Further down was a new Utawarerumono title from Aquaplus, shifting 8,500 units on Vita compared to 14K units on PS4. That's definitely valuable numbers for smaller publishers.

Golden Week itself has done little for gaming sales in recent years, but we'll see if there's a boost when the figures come back in a couple of week's time. 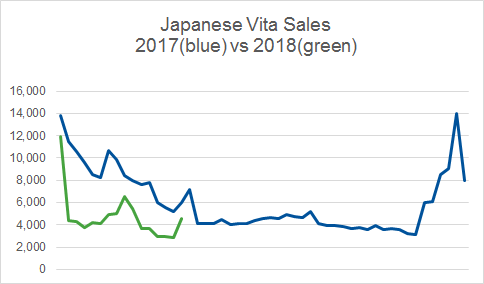 Last week's data here. Things go quiet now, until the end of May when the Persona 3 and 5 Dancing games hit the shelves, with a new trailer keeping up the constant media barrage.