on November 20, 2017
Good news Demon Gaze fans, Kadokawa and Experience haven't fucked this up! I seriously loved the original DG back in 2014. But, since then, pretty much every DRPG (Lost Dimension, Operation Abyss, Ray Gigant etc.) I've tried has messed about with the basics, added some stupid rules, impenetrable plot or weird twist or mechanic that made me hate them with extra bile.

The recent Mary Skelter from Idea Factory/Compile Heart restored some sanity and disorder, now Demon Gaze II keeps the back-to-basics trend rolling. There are a few tiny tweaks, but otherwise, this could have come out in 2014 and slurped on the massive success of DG, which sold over 180K thanks to its global appeal, probably well over 200/250K by now. 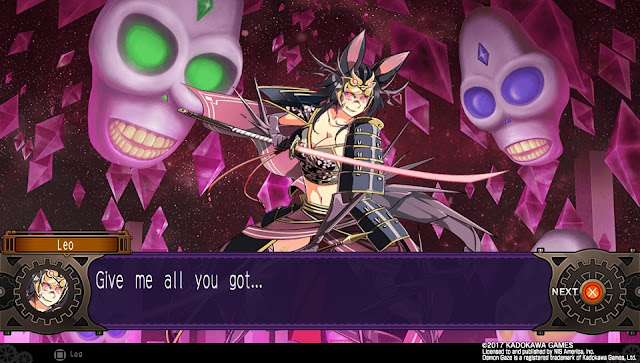 That's not to say DG or the sequel, are some boundary-pushing, genre-busting classics. Instead, in both games, you get a solid RPG adventure with a likeable cast and speedy gameplay. Nothing fancy or overtly whacky.

Styx and the City

While some of the cast follow on from No.1 and the scenery is pretty much interchangeable, the sequel has moved downtown. With such locales as Star Temple, Business District, Dragonwood Park, Royal Castle the perfect city of Asteria has a dark underbelly with its ruler relying on demonic forces to keep things quiet and under his thumb.

Each level plays home to a set of demon circles that you need to capture at which point the end of level battle is your next port of call. Defeat a demon and she can be bound the Demon Gazer's side (that's you). As a party, choosing from 16 demons, you can build a team that can take on the worst of the dungeons. 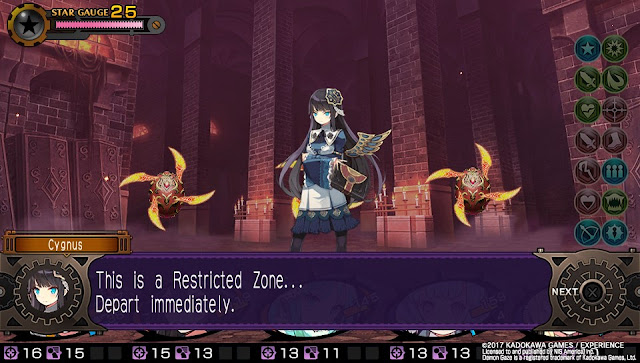 Battles are short and swift, with a range of physical or magical attacks, following the usual elemental rules. If things get tricky, turning the girls into demons will up your firepower, depending on how much juice is in the Star Guage. Familiar features like auto-route on the map, help you get around fast and quick battle will zoom you through minor encounters. Along the way, hidden skulls to collect for Prometh and mushrooms for the guy in the store provide secrets to find and extras to track down.

Every now and again, a major UMF creature will threaten the city and help advance the plot along, but this is really just a game to enjoy for the dungeon raids and a spot of grinding to take down the next demon.

If you want to get to know your demons a little better, you can take them out on dates and give them presents to improve their performance. One tacky but very minor addition is Maintainance mode where you need to prod them in the right spot, but it is so unsexy that you have to wonder what the point was.

You can bunk your demons in rooms on the second floor of Stella's House to make them happier, and decorate their and your room with furniture to increase some skills. As part of a rebellion, the radio studio in the basement provides a more entertaining diversion with the team putting out nicey-nicey shows to bring down the oppressors. This helps boost the Revolution score, but battling is the only way to progress. 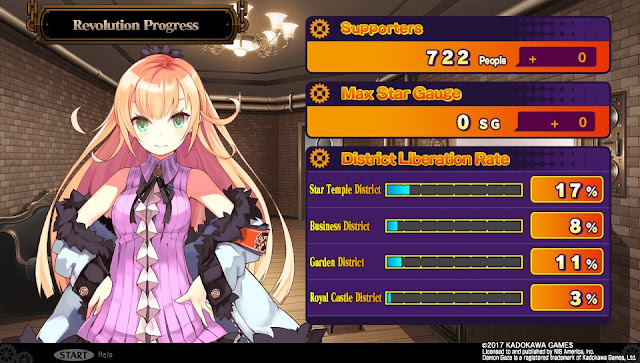 Out on the streets, you can grind by auto-map running and speed battling through any level a few times. There are also locked doors on each level for a fair bit of retreading later on. Some random running around is needed, as gems are rarer than in the previous game. That's presumably to make eager gamers buy the in-app purchases.

Still, it is not pushy or in your face. What is of concern is this game is about three years too late to ride the Demon Gaze wave, and while there's a PS4 version, players are saying the game looks poor on a big screen, so what was the point? Whatever comes next, faster and with more focus please Experience/NISA!

Aside from the pointless nod to fan service, a few gripes remain, you still can't go through a door sideways - really? Auto-map stops when you run over a trap, and every character does an annoying squeal, also when you're trying to find hidden areas, didn't any tester say that was slightly annoying? And in some early battles, the enemy will constantly respawn reinforcements which can be a big pain for beginners.

Those aside, if you just want to romp in the dungeons, beating the bejeezus out of all kinds of weird monsters, this is a great slice of fun. But I think sharing romantic gazes down the halls of the demons isn't much of a thing now.