on October 11, 2017
DRPG Tokyo Clanpool sold just 5,200 at retail according to Media Create data in Japan, landing at No. 12, meaning that even a decent and well-promoted game sells no better than some generic visual novel titles. Digital sales may be helping Compile Heart's game, but from a public perspective, all Vita news is bad. That's reflected in the latest Vita sales that dive again to just over 3,500, down a couple of hundred in just a week.

Other recent flops include Kadokawa's The Lost Child selling 3,658, when even just a year ago all-new titles like Mary Skelter managed 18,358 sales while Furyu's Caligula sold 31,243 sales. Perhaps it is just DRPGs that are out of favour now, but week after week Vita releases are showing up with reduced sales.

Next up is the quirky Itadaki Street on the 19th, will flinging characters from Final Fantasy and Dragon Quest into a board game make more of an impact? Demon Gaze II will further test the waters for DRPGs with the Global Edition release in mid-November. 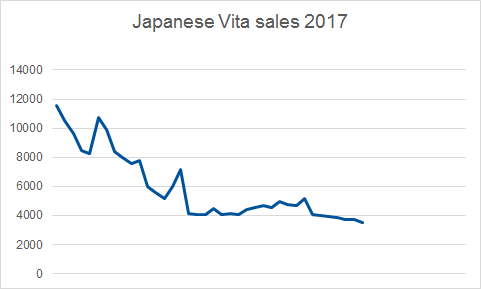 With Sony having missed all the seasonal opportunities to do anything to promote the Vita, the tick-tick-tick down to zero continues. Developers continue to flock to Switch and fans are left wondering what could have been if Sony had bothered with a HD, CPU/GPU upgrade a year or two ago.

Grab any Vita consoles you can because when production ends, prices are likely to shoot up, even though we still have a good year or two of games on the way.