on October 10, 2017
From the brief stories about the Japanese version, this has always looked like a pretty basic title, relying on the characters and their skills to give it some depth. Unfortunately, Touhou Kobuto V: Burst Battle doesn't seem to be deep in any capacity, apart from making me hate it lots.

Breaking away from the RPG titles like Genso Wanderer, it lets the girls of Touhou engage in some one-on-one battling. Led by shield maiden Reinu, you go from stage to boring stage engaging in some of the worst fighting action since the Atari Jaguar tried to do Virtua Fighter.

Bland worlds, poor level construction, boring characters, boring "plot", crap effects, piss-poor special moves are just some of the problems that put this in line to be the worst Vita game ever. While the girls all have a range of magical powers, they are pretty much just variations on the same feeble ball lighting effects, and see you bounce around the level trying to avoid them with no tactical skill involved at all. 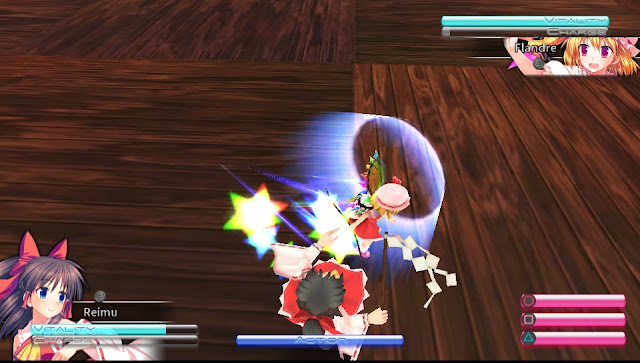 Yes, you can put in blocks to stop the "bullet hell" attacks, and special cards come into play from time to time, but the developers have clearly, never, ever played a fighting, battling or wizardly game. All we get is a sack of crap. as Meiling and others spout inane drivel at each other.

With only nine characters there isn't even much variety and given the super-niche nature of the game, good luck with finding someone to play in the game's online mode. Each girl has a story to follow, but they are so shallow and banal, few will even bother to wade through them all. 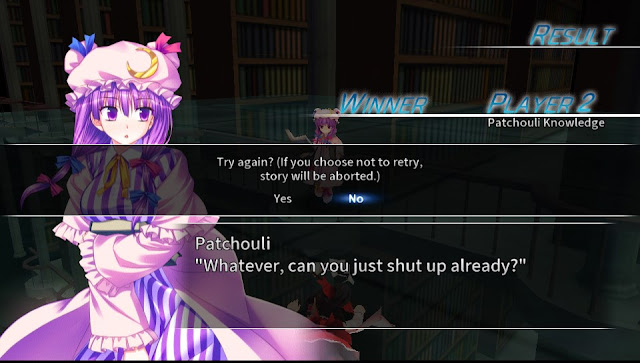 Ironically, the game does have a neat digital manual that shows all the commands and concepts off, but in action, Burst Battle quickly descends into a farce. To think, some people might get this for the PS4 or Switch, imagine how depressed they will be.

Some skills are overpowered, others are too annoying to even want to use, but whatever you try to do, you'll only come away from this game feeling either very disappointed or ripped off. Note that new updates add more stages and characters, but they really fail to make any difference to how poor Touhou Kobuto actually is.