on October 07, 2015
The Vita has a rocking week in Japan with Falcom's original title, Tokyo Xanadu, beating the combined sales of the latest Winning 11 to grab the No. 1 spot on the Media Create chart. Selling almost 90,000 copies (the Dengeki chart has it at over 100K) - certainly more than that when digital is taken into account, that's impressive given today's Vita climate.

Despite that and several more new entries, the bad news is Vita sales fall almost 4,000 to 15K, suggesting that new games aren't getting potential Vita owners excited anymore. Perhaps if word of mouth does well, sales could get a small boost next week. 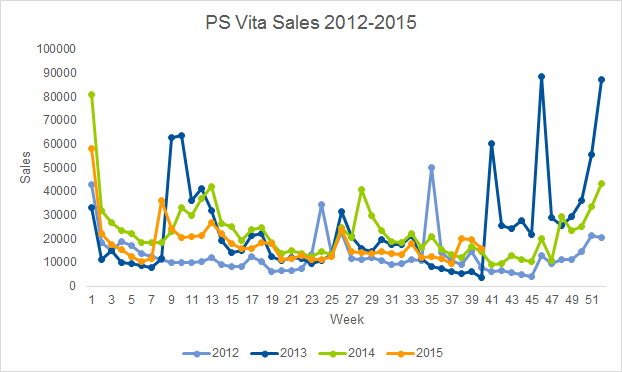 Better news for Sony sees PlayStation 4 crush everything with 45,000 sales as the price cut kicks in. What chance a cheeky reciprocal Vita price cut later in the year to help drive sales into the holidays?