on October 08, 2014
Last week saw new games arrive for the Vita but sales remain firmly uninspired. As the Media Create chart enters the final quarter of the year, that's where the Vita sees its biggest sales in 2013, but no sign of that so far, with only 14,432 Vita and Vita TV units sold last week.

Kingdom Hearts 2.5 HD does the business for the PS3, imagine how an upgrade of the PSP version would do on the Vita? Danganronpa Another Episode keeps chugging away in the top five while Legend of Heroes II starts to open the gap on the PS3 version. Koei's duo of Ar Nosurge Plus and Ciel Nosurge Offline make modest entries. Taking a peek at the other Famitsu chart, they both sold 60-80% of their stock, so perhaps publishers are playing it very safe.

This week sees the arrival of Monster Hunter 4 Ultimate on 3DS, so don't expect much else to happen for next week's cahrt. Chaos Rings III hits for the Vita next week, which could do some business. Just for references the PS4 is now off to a worse sales start than Sega's Dreamcast - chortle! 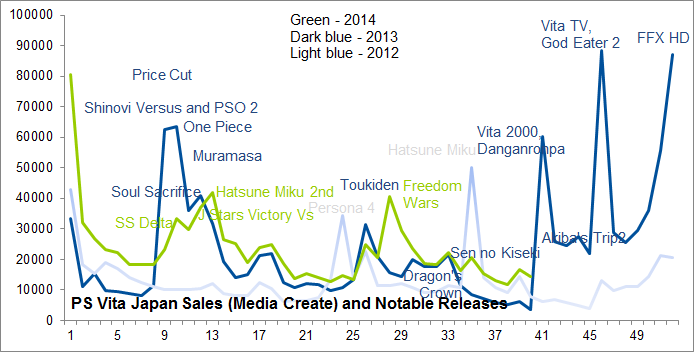