on June 10, 2014
After all the low-key stuff from Sony's Keynote yesterday, for an hour today I thought Sony had actually done the right thing and got its one big announcement in for the Vita. That's all I wanted from this show, one big slab of a classic Vita game to look forward among the modesty and indies.

Shahid tweeted the news, so it had to be true, right? Then PS blog posts  followed. The screenshot below, I won't embed the tweet in case Sony deletes it, shows nearly 500 happy EU Vita owners spreading the news. The US tweet has already been removed, I don't know how many retweets that got. 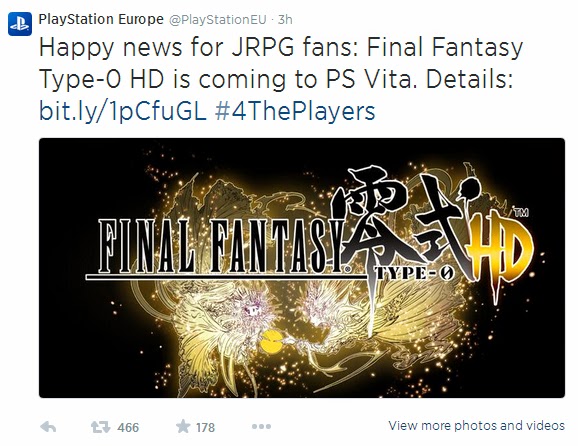 Then, just one hour later, Sony corrected itself, having somehow managed to mistake a small handheld for a big brick of a machine. That's a whole lot of last minute play-off defeat pain right there! I'm not blaming any person, mistakes happen, but when you are relying on one big announcement that then doesn't happen, you've just let down a sizeable and deeply invested community.


Sure, screw-ups happen, but Sony and Square have to realise how much joy that original piece of news created and see the potential for sales, and then DO THE RIGHT THING!  It won't take much effort to wedge this onto the Vita, so how about it?