Hatsune Miku storms to No. 1 in Japan

on April 02, 2014
It may be a time of blossom and family in Japan, plus some taxation increases that will kick up the cost of living after this week, but the nation's gamers are still buying their hardware. Over the last week, the Vita sold 40,000 units according to Media Create, continuing a strong rise. 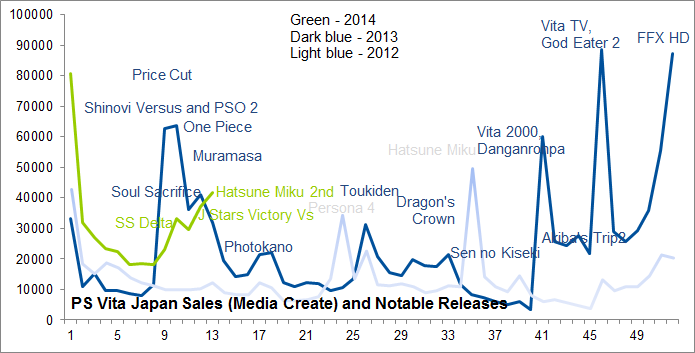 On the software side, last week's big releases were led off by Hatsune Miku and her 2nd Diva effort, storming to No.1 and selling over 100,000 on Famitsu, just below on Media Create and beating the PS3 version. That's down from 160,000 for her debut, the PS3 version picked up 60,000 sales, unlikely to be a coincidence. The other new entries didn't make much of an impact while J-Stars continue to shift decent units.