on November 27, 2013
Final Fantasy XIII Lightning Returns tops the chart in Japan on PS3, showing what can expect for the December release of FF-X HD. For the Vita, God Eater 2 keeps going in the top 10, up to over 300,000 sales with another 40,000 this week, showing very good legs. Atelier Rorona arrives at No. 13 on Vita, selling 17,500 and out-selling the PS3 version.

On the hardware front, Vita sales dive after the recent hubbub, but still shifting a decent 21,000 and Vita TV sales plummet, after last week's impressive start, to below 8,000 (total sales now around 50,000), which means the west will likely get this device soon rather than later since it isn't a gangbusters seller in Japan.

Still, 20,000+ a week is a decent level for the Vita to hold and build on, as long as the games keep coming, and with Final Fantasy HD, Gundam, Dragonball and a couple of others to come, there's reason to remain hopeful that the sub-10K days are behind it. Games sales should look clearer if we add in Famitsu's download data, although that means switching all my data from Media Create. 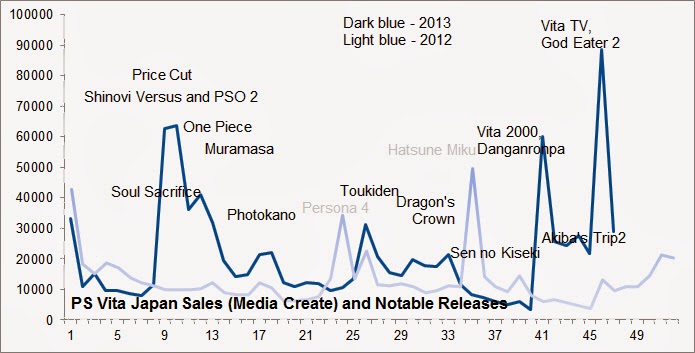