on October 09, 2013
Media Create's sales show a feeble ending for the reign of the old Vita in Japan, the day before the new models go onsale. Hardware sales are down to near its lowest ever at 3,500, despite the shining new releases from last week. On the positive side, there is lots of chat on Twitter among Japanese deciding what colour 2000 model to buy and regretting not pre-ordering, suggesting strong sales ahead. 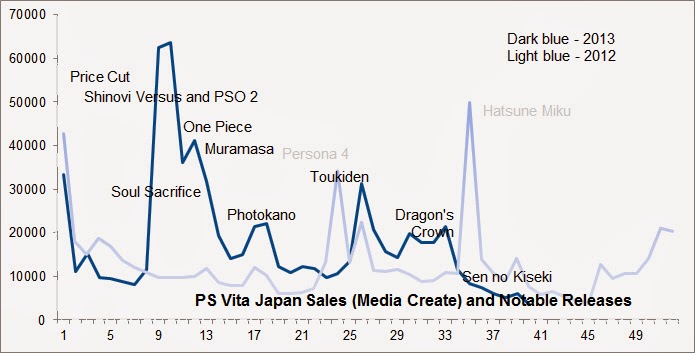 Note, fixed the chart, it was stacking wrongly.

With its perky marketing and a hefty raft of games (Akiba's Trip 2, Sword Art Online and even a little Monster Hunter, eventually) plus the Vita TV going onsale in November, expect the numbers after the first week's hijinks and subsequent calm period to go steadily upward. On the software side, no new entries in the top 10, but the two Vita games both held their place with modest sales. No need to say what's at No. 1, although it'll be kicked out by Pokemon next week.