UPDATE: Since I wrote this, a piece appeared on GamesIndustry.biz with Sony saying it hadn't decided on attending Gamescom yet. If Sony doesn't, even with a compact Vita-only show, then it really, really is making a huge mistake. UPDATE to the UPDATE: Gamescom organisers are now saying Sony will definitely be at the show.

After the farce of E3's near Vita-less keynote, the one bright spot is that Sony's PS Vita will likely dominate at August's Gamescom event in Germany. Why? Well, for a start Nintendo is skipping the show, and with both Microsoft and Sony holding off on next-gen until 2013 (at least), Vita will be the newest gadget in town.

Having realised its cock-up at E3, and acknowledged the error, Sony should have figured out that nothing less than a smorgasbord of Vita content will suffice and will be doing its best to present a killer line-up. Remember that massive list of developers shown at the NGP's unveiling? How many of them have yet to pop their heads over the ramparts? Even if some of them are distant 2013 releases, Sony needs to get the crowds whooping again.

Also, by that point, Activision might have managed to knock up a demo, video or even a blurry screenshot for CODBOD, making it one of the hottest games at the show. EA will also be there and likely to be showing off Vita versions Need For Speed and, hopefully, Warfighter. Those will generate a great deal of interest and if developers continue in the vein of off-shoot games of the big games, then buyers should come flocking. 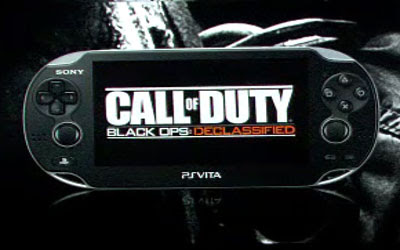 This is NOT how you unveil a marque game

Finally there are the big, deep, unknowns, a new GTA on the Vita? That elusive Monster Hunter? (which will probably be announced at Tokyo Games Show, in late September, but you never know.) Just one killer announcement will get the Vita rocking and its stumbling start will be a footnote in history.

Sony knows it has to make up lost ground, and pressure from partners on all sides (and the press hounding them to Hades and back) means it can't cock things up again, can it? Also, Sony killed the PSP in the west by over-focusing on the PS3, it only has a short window until PS4-mania sweeps across the media, so won't get a second chance in 2014. What would you like to see at Gamescom from Sony?

Even after Gamescom, Sony has the Tokyo event as the last real chance to kickstart the Vita, after that it will be pretty much old-hat, swamped by next-gen consoles, perhaps an upgraded 3DS, super smartphones and tablets, streaming games services and other innovations that not even a price cut can't cure. But, the western media outside of games won't give that show much coverage, leaving Gamescom as the last sales pitch for 2012.

This year's Gamescom is taking place, 15-19 August, in Cologne, Germany.