on May 10, 2012
Under 18s probably shouldn't press play on this trailer, as it is firmly done in the style of gruesome. Not much detail of the gameplay is revealed, still focusing on the "bring out your bones" method of weapon creation.

UPDATE: Andriasang now has a translation of the main news from the launch event, with details of gameplay, character customisation, multiplayer and voice chat among other things, well worth a read. There are also some videos of off-screen play, which shows the game's God Eater like aesthetic, well that's what I see in it.

It does say the game is out this Winter, so not long to wait my nightbreed friends. The launch event has probably just finished in Japan, will have more from that as it trickles out. The larger format screenshots are now on show at Andriasang... 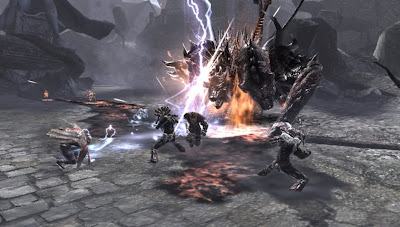 They're largely the same as yesterday's images with a mix of art and screens.