on July 01, 2011
There are still a few PSP games in the pipeline for stores, Namco's next Naruto title, Ultimate Ninja Impact is due out in Autumn and here's the box shot to prove it. 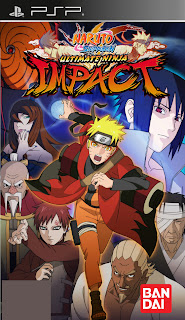 Ultimate Ninja Impact lets players unleash their honed Jutsu skills through exciting single-player and multiplayer modes.  Story Battle lets fans become part of explosive NARUTO SHIPPUDEN fights straight from the anime with more events and battle sequences on the PSP.  Tag Battle lets two friends connect through Ad-hoc to team up and complete over 20 missions cooperatively, while Versus Battle lets players battle against each other with their persistent customized characters across all modes.  Over 20 characters are available to choose from across the NARUTO SHIPPUDEN universe with customization options that carry through each mode within the game.