on June 22, 2011
Let's pick a stupid date to launch a console. According to Amazon is listing December 31 as the shipping date for Sony's PlayStation Vita in the US. Amazon UK still doesn't have a date but we're still clinging to the Autumn launch based on Sony's earlier sponsorship deal. 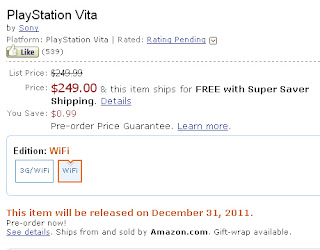 Assuming the weather isn't horrendous, that the postal service works and like anyone is going to be in a good state on January 1 to play it? Its a dumb, dumb, dumb date, and hopefully just a placeholder.
launch date sony vita us launch date.