I backed this Mega Drive original shooter on Kickstarter (for the Switch version) a few years back. In a pleasant turn of events, it has turned up on the Vita, thanks to Eastasiasoft with a physical release (preordered!) and has just hit the UK PSN, also snaffled.
As with any backing, I didn't know how good it would look, how smooth it would play, and how one-more-go fun and slick the action is. But even on the ancient Vita, Xeno Crisis is as smart as you'd hope for, delivering awesome bursts of action that are both retro and impressively modern in their feel, and rapidly grabbing you by the throat with its 16-bit harshness.

In true Colonial Marines style, Xeno Crisis starts off with a dropship landing one or two marines at the gates of an outpost where communications have been cut off. Instantly, there's that classic Alien vibe in the battered chrome of the perimeter and air of menace.

Sure, the first few rooms are just to get you warmed up, with almost polite lines of xenos queuing to be shot, but soon the pests are crawling out the walls, ceilings and floors, screeching and lobbing alien death at you. 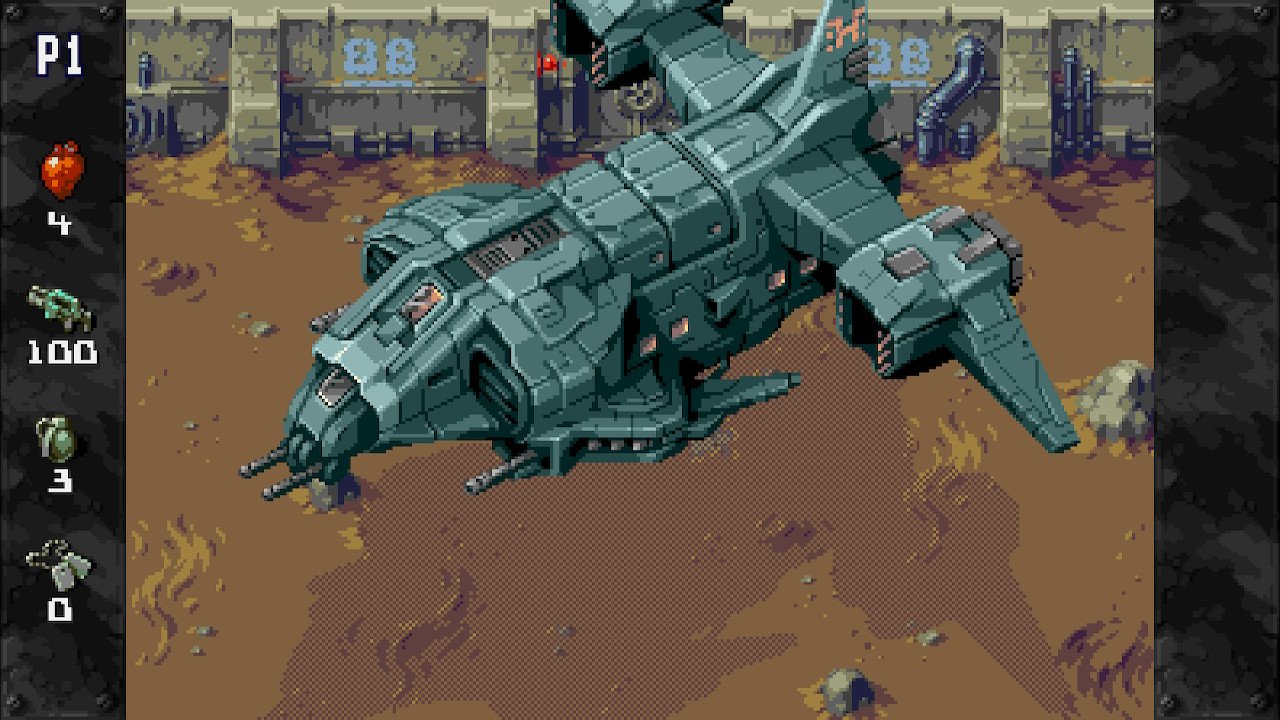 The marine's ammo is limited, with crates dropping as he/she nears empty, forcing players to keep on the move around each room. Dogtags can be collected to provide upgrades and power-ups between missions, so are well worth collecting, in a risk vs reward way, and there's the odd key-card needed to open a door and remarkably-indestructible people to rescue around the rooms.

As the nasties get tougher, so do the weapons that drop into a room at random points; shotguns, spread shots, BFGs, flame throwers and lasers all give you a key advantage for 20-odd seconds before they run out of juice or ammo. 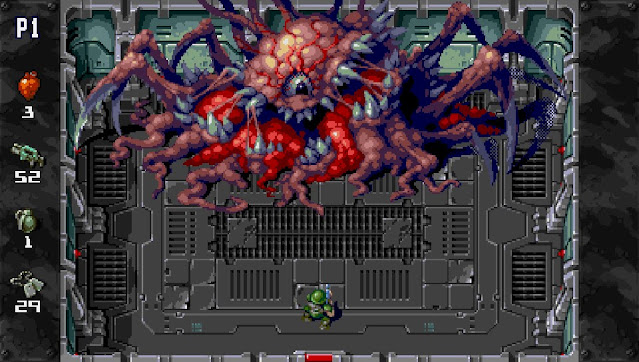 At the end of each level, impressive bosses look particularly menacing and throbbing, they take some serious firepower to bring down, and you'll be hoping for a well placed medical crate, grenade or ammo box at several points to try and crash through to the next mission. Background scenes change for each set of rooms, lovingly packed with detail and neat use of perspective.
There are plenty of little details too, like clanking sounds if you try to push through a locked door, crackly (but high quality) voice samples encouraging you on, and the whole game is bristling with perky animation from ammo shells littering the floor to the neat exploding barrels, all looking gorgeous on the Vita OLED.

The Savaged Regime soundtrack is particularly excellent (track 5 is my favourite) with relentless pace and thumping techno, all programmed to run on the Mega Drive sound chip, so honestly retro in the best possible way. 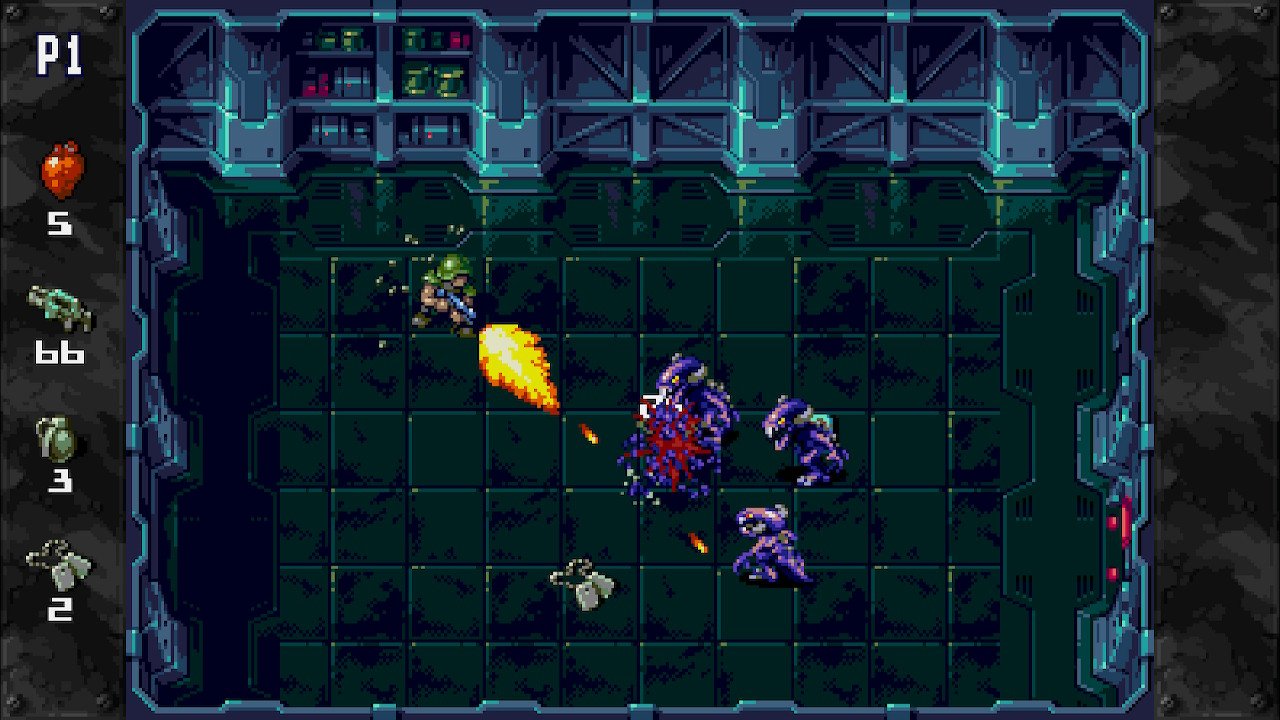 There are a couple of noticeable differences between other versions and Vita, the room transitions are a bit jumpy on Sony's older gadget, and there may be the odd fractional delay or stutter here and there, but they seemed to clear up after a hard reset (top tip!). Point of interest, Xeno Crisis doesn't use the Vita's exclusive mode to free up extra resources for the game, a curious move given most of today's game take advantage.
On the plus side, the Vita has the better controls, Bluetooth audio and proper trophies compared to the Switch! Another point of interest, the PS4 version has melee and discard controls on the lower triggers, the Vita has auto-melee and doesn't bother with discard, which would be good for getting rid of the infuriating homing-weapon and the weak-ass rebound shot.
Generally, the static cut-scene art looks a little primitive compared to the polish of everything else. Otherwise, my only moan is the lack of a high-score table, scores are listed when you complete a level but there's no table listing, or times for speed runs that would add a little extra incentive.

Another thing missing is secrets, alien shooters are the perfect type of game for a little bonus tunnel or secret weapon tucked away somewhere special, the similarly historic Ultracore really shows how to do it!. Perhaps there are, and I haven't found them yet. Some extras are accessible on finishing the game with a Boss Rush and Infinite mode to keep you entertained.

Anyway, Xeno Crisis on the Vita is a top-tier if narrow-focused shooter, perfectly honed with decent replay value and impressive production values, showing that retro doesn't have to mean quick or cheap.
Just the Evercade version to go, and I'll be done until Xeno Crisis 2 or whatever the Bitmaps have to offer next!