on October 09, 2019
A Hole New World answers the question that some of us have been asking since our earliest platform memories. What's below all those horrendous dead-drops we've come across that have consumed so many of our precious lives?

In A Hole New World, dropping into one of those holes results not in death, but in a trip to an Upsidedown-like world Reversee where the rules of physics are reversed and you can use the many tunnels to avoid traps and tricky areas on the surface, and vice versa. Sure other games have used the mechanic to open up new worlds, hide secrets or lure players to their doom, but HNW uses it as a broad theme. 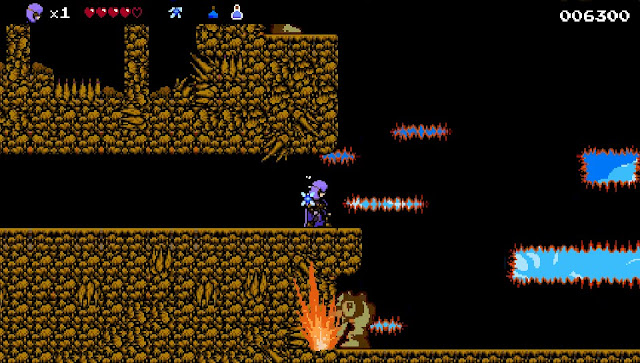 The plot of A Hole New World sees your city invaded by floating or armoured monsters from the Upside Down World! As a Potion Master, you must lob your spells, rather like the fireballs from Ghosts n Goblins to defeat the array of enemies before you. Levels contain secrets to find, and sometimes different routes across the level.

The game is a 750MB download on the Vita, which for a bunch of NES/Spectrum-era pixels (without the colour clash), is a big file, suggesting there's either a huge world under those gaps in the scenery or something else. HNW only has five levels, so checking what the deal is. 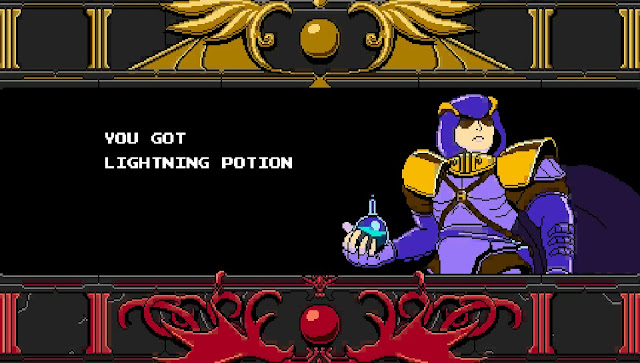 As you'd expect of a potions wizard, the game is not about charging at your enemies and taking a few hits. Instead, you need to plan attacks, time jumps and throws to perfection and learn the patterns of the bosses. Unlike so many other games, HNW is happy to flood the screen with enemies rather than have you plod along taking them down one-or-two at a time, which is cool and you have enough lives to experiment with your approach.

Fortunately, there is plenty of food around the place and behind closed doors to keep your health up and checkpoints to save the dreaded back-to-the-start-itis. After you complete the first level, you meet Fay, a fairy, who you can fire as a more direct weapon, and defeating the further end-of-level bosses gives you new potions to throw around. 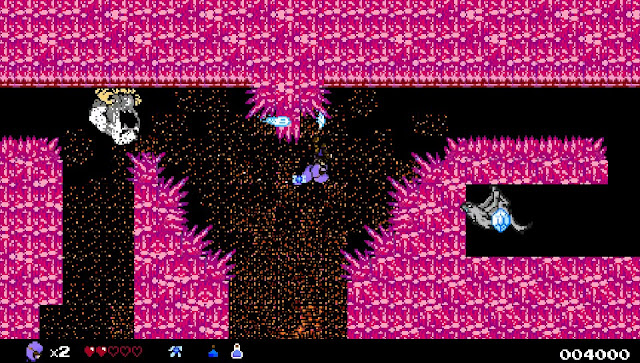 Unfortunately, HNW isn't totally perfect on the small screen. The shrinkdown from the 2017 Steam original leaves black bats against a dark background invisible, and you'll learn the hard way about all sorts of prickly passages. Also, if you slip back down from a series of complex jumps you can end up in swamp of enemies, and the later bosses seem hard for the sake of it as opposed to challenging your skill.

That said, A Hole New World is a short but joyous romp through the world of pixel platforming with a neat twist, a strong visual "scratchy" style and listenable tunes. With Game + mode, boss rush, challenges and other extras, there's plenty to keep us playing too.