on September 25, 2019
Space, the final frontier. These are the - die you mothers! Sorry, some days I feel in peace and cosmic harmony with the gaming world and other times, I just want to blow stuff up. Today is one of the those days and here's Habroxia from Lillymo to provide the drug.

Somewhere between Xenon and the legendary Nemesis comes Habroxia, a sparkling dive into shoot 'em up nostalgia. It throws chrome-tinged vertical and horizontal levels at us with waves of ships firing chunky bullets at your vessel from all directions with a range of growing bosses (why do they have names, when there's no plot?) with heftier firepower and bigger health bars the further you get in. 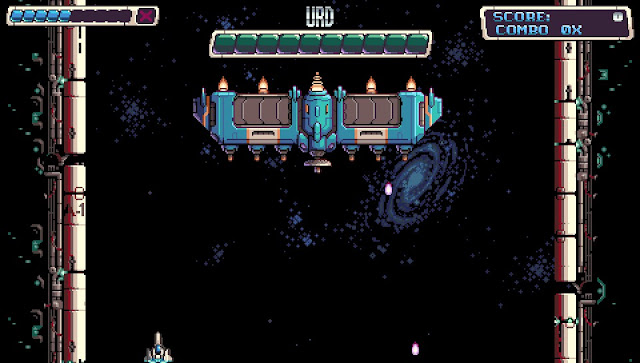 On its own, Habroxia looks nothing too dramatic, but add all the little features and tricks like different bullet types, various attacks, big lasers, some of which you can shoot down, across and at angles. Together we have a challenging shooter with some impressive ideas and good use of Trophies to get us perfecting those trigger finger skills.

For a start, you are blazing across one of the early levels, and all of a sudden your ship and the action rotates and we get a vertical shooter. Some levels, you have to rescue astronauts, who are tucked away in tricky corners (don't shoot them) and the challenge builds up with a persistent charge.

Along each level there are plenty of power-ups for your rockets, bombs and lasers, risking life and limb to collect them and health for your shields. Also, picking up credits means we can go mad in the store where you can permanently power up your ship to help out on the tougher levels. Each level is packed with asteroids, whoosy-radar things, ground installations and waves of attack craft. Far from bullet hell, you still need your wits about you, but the core levels follow set patterns, so you can learn where to dodge and what to take out first. 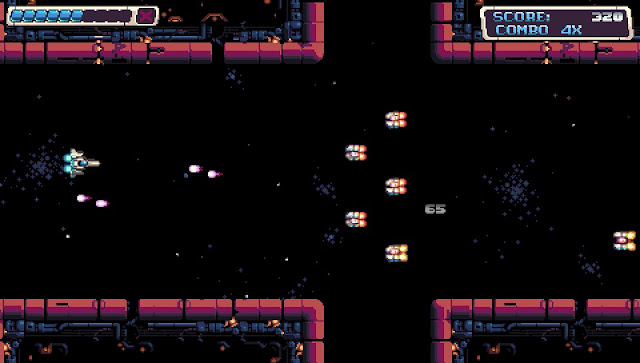 The controls are also a bit unusual, the right trigger fires your main weapon, left trigger and the right-stick fire your directional weapons and both triggers launch the third weapon type. The combination has the Vita shaking rather a lot but the alternate controls make more sense, using the shoulder button to boost. (bonus point to the game for having the controls listed in the digital manual!)

In play, there's progress from level to level, with no need to go back to the start. Combos give your score a bit of kick, depending on how long you can avoid enemy bullets, and new modes are unlocked when you reach a particular point. Invasion mode goes vertical with your mission to keep ships from reaching the bottom of the screen while Rescue sees those plucky astronauts in need of assistance and Shield Maiden has you desperately trying to dodge the enemy.

Habroxia combines some lovely ideas, like the backstories of the astronauts, not some are quite perfectly implemented, while still adding to the sense of drama. A good spacy-handbrake turn sound would really top off the rotation mechanic, while some more imagination in the weaponry department would have been cool. Also, I hate that a space ship can still crash into solid land, surely some sort of collision avoidance is fitted to these things?

The music is rather plinky and doesn't seem to help the atmosphere much, but there's nothing that really stops this being a great game. With plenty to do beyond the core missions, Habroxia is solid fun, looks retro-gorgeous and is just a layer of polish off from being awesome.