Now you can use DualShock 4 for iOS 13 games and iPhone Remote Play, no need for Vita 2?

on September 20, 2019
The latest release of Apple of iOS 13 sees iPhone users easily able to pair a DualShock 4 controller over Bluetooth and play the latest Apple Arcade games.

A rush of launch titles like Oceanhorn 2, Chu Chu Rocket, Mini Motorways, Sonic Racing, EarthNight and around 70 others, with more set to come for a £4.99 monthly subscription make it a tempting move. The update also makes the Sony PS4 Remote Play iOS app usable!

Physically, all you have to do is hold down the PS button and Search on the DS4 for a few seconds with the iPhone's Bluetooth on, and it will appear on your phone, making mobile gaming a whole lot easier to control. I'm sure Android users are way ahead of me on this, and other MFI controllers are available! 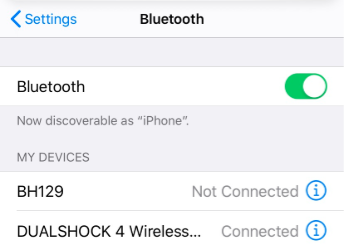 Why Sony didn't allow the DS4 controller to take over from the Vita for newer games at any point, either for direct control or more natural remote play, who knows? After all, the Vita has Bluetooth and Remote Play, making it ideal for more flexible gaming.

And it was available long before the PS4 Remote Play app appeared on iOS. The brutal truth of which now makes the idea of a future Vita pretty much redundant. All you need is one of those bondage restraint clamps and your iPhone (or Android) and the DS4 represents the future of portable gaming - still looks butt ugly, but usable. Or, there's the iPad's bigger screen at rest on your legs for in-bed play with a bit less squinting.

So, enjoy the Vita as the retro device it now is, with the last of the studio and indie games on the way, as technology is moving on without it. Even a modestly recent iPhone has a way better screen for brightness and resolution, chunky speakers and stronger WiFi.

My little XR is devastatingly powerful with great battery life, making the Vita look like the relic it is, either for remote play or brand new games that Apple can attract with its massive budget to propel the arcade service into people's minds.

Using this super-phone/DS4 partnership, Sony's own developers don't have to worry about hobbled versions of PS5 engines for Vita 2 "exclusive" games, everything will run on the PS5 or PS 5 Pro with 5G streaming for Remote Play at home or away on whatever phone or other device you own.

Just in case you had the tiniest lingering hope of a new portable from Sony, as the new Switch Lite comes to sweep up seasonal sales, why would Sony try to compete when it can let iPhone do the legwork? And having only dabbled in iPhone gaming (Angry Birds, Fieldrunners etc.) this combo feels like a decent, workable, way forward, especially with the Apple Arcade lineup - and when that opens up on Apple TV, who needs a big box console for indies?

Yes, I'd love to see a Vita 2 or an official Sony PS4 Remote Player handheld, but for now this is as good as it gets.
apple arcade bluetooth dualshock 4 ios 13 playstation ps vita ps4 remote play