A Winter's Daydream frosts over the Vita

on September 16, 2019
Answering the age-old question, what happens when your grandma transforms into a cute chick? A Winter's Daydream is a western visual novel coming to the Vita according to a trophy listing (including a platinum). Developed by Ebi-Hime, the plot, if that's what you want to call it, sees 19-year-old Yuu unable to stand his younger sister, Otoko, and the feeling is mutual.

It’s been almost a year since Yuu saw her last, having escaped his dreary home town to study in the bustling city, but with the advent of New Year’s he finds himself obliged to return to his family to celebrate.
Unfortunately, Yuu’s absence has not softened his younger sister, and Otoko is just as sullen and surly as ever before.
Finding the atmosphere at home unbearable, Yuu decides to escape once more — not to the city this time, but to his grandmother’s snowy, secluded village.
The reunion between grandson and grandmother starts normally at first… until one moonlit night, when the pair witness a star streaking through the sky.
The following morning, Yuu enters the kitchen, still half-asleep, to discover...
“Who are you? What are you doing in my grandmother’s house?”
...that his grandmother has transformed into a cute young girl!
What is the reason behind his grandmother’s drastic change? Will Yuu be able to restore her to her original self? And why is she so adorable?! 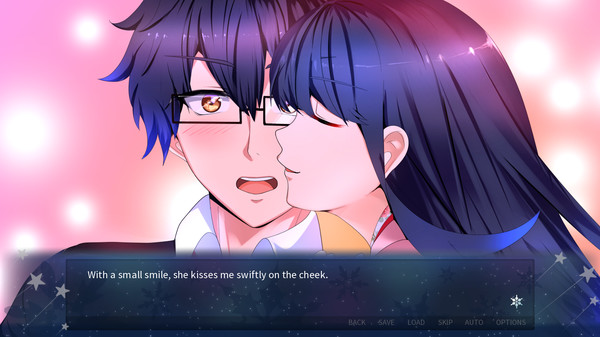 The developer has a host of idol and similar games in his archive, with a strong artistic style and reasonable reviews, so here's hoping more head over to the Vita.
a winter's daydream dating sim ebi-hime granny ps vita visual novel