on March 21, 2019
A Vita game in the Media Create chart? Miracles still happen, so welcome Kenka Bancho 2nd Rumble (trailer) which squeaks in at No. 18 selling just over 4,000 copies and proving that pyhsical releases are still (just) worth doing if the brand is strong enough. That could be the last Vita game to make the charts, so enjoy!

On the hardware side, Vita stock has now presumably run out in most retailers as sales dived to just 870 units, quite the collapse from last week. That must mean there's only a tiny amount of new units to snap up around the world before we become reliant on second hand stock. So, if you haven't got a new Vita, time is seriously running out.

That also makes this the last chart I'll produce, there's no point watching the number fall to zero, as it inevitably will. Nine years for one hardware iteration, not bad indeed.

NOTE: In inexplicably good timing, Media Create is stopping publishing the chart data, so just as well! But that does mean one less source for sales data for future devices, which is bad news. 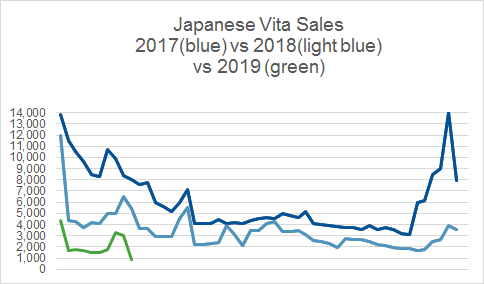 A final peek at the early years... showing the hardware only sold on big game releases and during the holiday season, unlike the Switch which sells consistently, and goes mental on big game days. 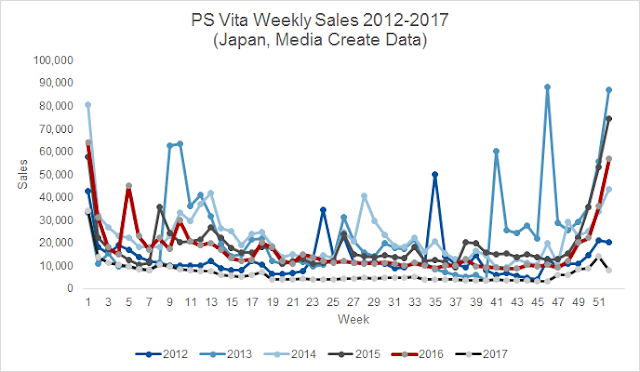