Vita sales perk up to around 2.5K in Japan

on December 12, 2018
It is very hard to get excited about any jump in Vita sales these days. but the old dog managed 2,484 in last week's Media Create figures as the holiday season sales start in earnest. That's just a tad lower than the Switch at 280,000, taking 75% of the whole Japanese hardware market, helped by the arrival of Super Smash Bros.

For reference, the Switch also passed the Vita's lifetime sales last week. It took less than two years to outsell the Vita in Japan, an impressive achievement for Nintendo and a sad indictment on how poorly Sony handled its second and last handheld.

SSB sold 1.2 million copies, showing just how much Japan loves their Switches, with 8 of the top 10 games for the hybrid. No Vita games in the chart, but Atelier of the New Earth is out this week across all formats, so might not even make the smallest of dents. 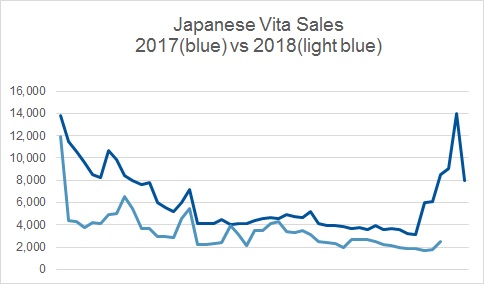