Vita end of year sales spike to 4K in Japan

on December 31, 2018
Rushing to the end of year in Japan, Sony celebrated the launch of Square's Dragon Quest Builders 2 with some 58K unit sales of PS4 hardware last week according to Media Create data. The PS Vita, with no new major releases in months still managed a decent 3,939 despite no support whatsoever, and will likely perk up further in the last week of 2018.

That will probably be the final "good" week for sales, as it drops off the radar of most Japanese publishers and retailers. Media Create still tracks the couple of hundred Xbox One sales but I don't think I'll keep going with this chart once it falls below 2K regularly, what's done is done!

Japan's otome fans will likely be flooded with easy ports and updates as other releases dry up, but beyond a few gems like  KonoSuba RPG: God's Blessing, Catherine Full Body and possibly Romancing Saga 3, pickings look pretty slim out east. 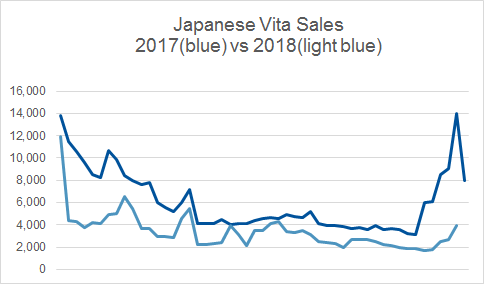