on December 20, 2018
Life of Pixel was one of my favourite PS Mini games, dragging us back through the history of gaming. Super Life of Pixel is a major update that adds a bunch of features, notably the reward of trophies for all those daring pixel-perfect leaps, off-screen jumps into the unknown and risking death to explore the new secret areas.

Starting back at the dawn of consumer home computer gaming with the ZX-81, there are eight levels per computery world, with our hero the green cube Pixel leaping merrily around each level collecting diamonds, secret fruit and other goodies. Come the BBC Micro levels, he can double jump and there are more skills to learn along the way with vehicles to ride in another of the game's major updates. 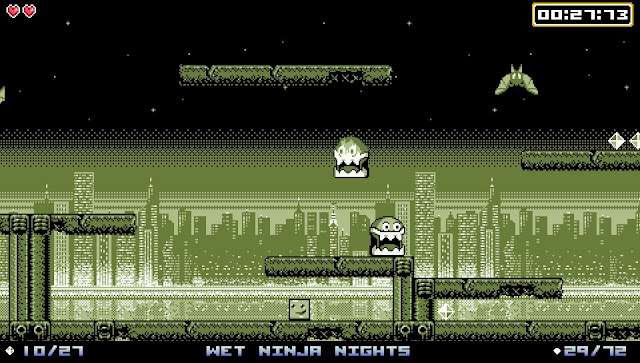 Sound, colour and art style all pay homage to the machines of the time, with Speccy colour clash, bold BBC colour and gorgeous SID like tones from the C64, all the way up to the relatively modern hi-res visuals of the SNES and Amiga. There's also lots of nods to the hit games of the times, a must see for any true retro gamer.

The gameplay itself is pretty simple with well-timed leaps the order of the day, dodging the batty or robot enemies, and finding the trigger switches that play an increasingly important role in the later levels. Blue pixel relatives pop up from time to time with some sage advice, if there's some new move or way to explore.

With spikes popping up on floors and ceilings, gravity reversal and teleport points, there's a lot going on as you advance through time. Each new world brings back fond memories of gaming past, and the harsh challenges they put up. 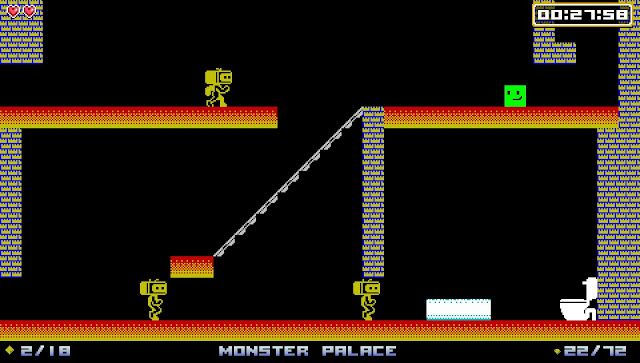 After the first few sets of levels, the rest open up, so if one set of flick-screen puzzles proves really tough, perhaps because of the lasers, the barrel-chucking bosses etc, you can go and play levels from another era. Which is a relief, as some of the later levels are big and daunting affairs, and with only two lives per level, you can soon get fed up with one particular tricky mission.

Adding to the trickery are bubbles to float in, bombs to break up walls, jetpacks for space rides and more little joyous nostalgic moments for gamers of a certain age. If you want an extra challenge, online leaderboards show off the best times for each level. 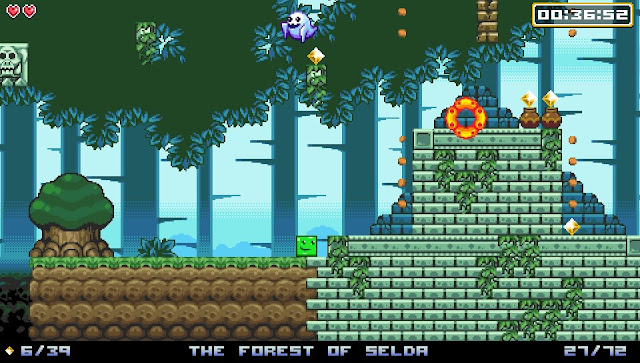 Its impossible not to like Super Life of Pixel, such a charming adventure through time and games past, with a solid challenge. With such rich history to pick from, there will always be room for more and you might moan about not seeing a nod to your favourites. Yet, while you'll die hundreds of times getting there, its all good fun.