on November 16, 2018
While Sony yells about the mega sales of the PS4, now past 86 million units in five years, it still had the corporate sneakiness to bury the fact it won't be at E3 next year. Rather than just be honest about this news, it was buried in the report, causing the usual fuss. Sony could have made the statement clear and in bold, and there would be about 10% of the drama being shown.

But why the low-key effort and why won't it be there? Given that PlayStation 5 is lurking in a lab somewhere, it sounds to me like Sony had a long-standing plan for PlayStation 5 that has since been derailed by the hybrid success of the Switch and Microsoft’s new focus on cloud “any-device” gaming.

Likely, I suspect Sony is revising its next-gen plan to include mobile, any-device or play-anywhere gaming as part of the package, instead of the PS4/Vita Remote Play combo that didn’t take off when Sony cancelled its portable. It needs to be part of launch because if you make it an extra like PSVR, then only a tiny fraction of the users will adopt it.

Will this be a touchscreen controller as in the one Sony patented recently with a larger screen? Will it require a complete re-engineering of PlayStation Network to link multiple devices and services? Either way it sounds like Sony has had to delay PS5, which is the only reason it wouldn't want to be toe-to-toe with Microsoft at the world's biggest game show next year.

Microsoft can use the time to flog Xbox One X2 and Nintendo a more portable Switch next year. Sony will be in no hurry to launch PS5 having trounced Xbox this gen, and since they canned Vita 2, all their resources can be focused on the one product, no matter how many parts there are to it.

Of course, there are plenty of other events Sony can show a PS5 at, in Japan, Europe, or it can host its own global press event at a time exactly of its choosing. That might be next year, more likely 2020, but any later and it risks losing fans to other devices.

Me, I got my PS4 last week and have a five-year catch up to get on with, so I don't really care. 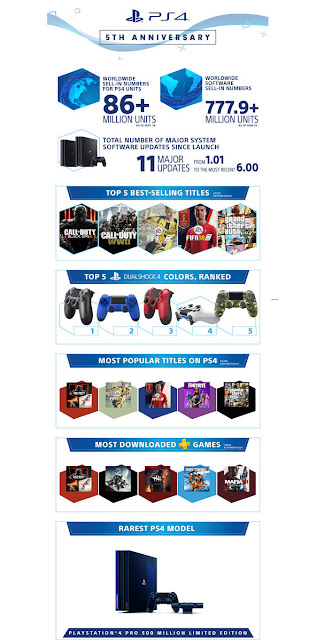