Review: I am the Hero

on November 28, 2018
Everyone needs to play a good beat 'em up up once in a while, and here's Ratalaika delivering a punchy port of I am the Hero, the well-rated Steam brawler from Crazyant. Reduced to single player on the Vita, you wade into battle on the mean streets of somewhere, with only your fists and feet to deal in revenge for, maybe, some stolen chemicals from a hospital? I guess the plot isn't the strong point here.

Set at an oblique angle, rather than the flat levels of classic  brawlers like Double Dragon and Renegade, you're still on a flat plane, limited to left and right movement as modest waves of thugs from the rougher edges of the city line up for a kicking. Using directions and buttons, you have around 16 moves at your disposal, and stringing them together into devastating combos is great fun. 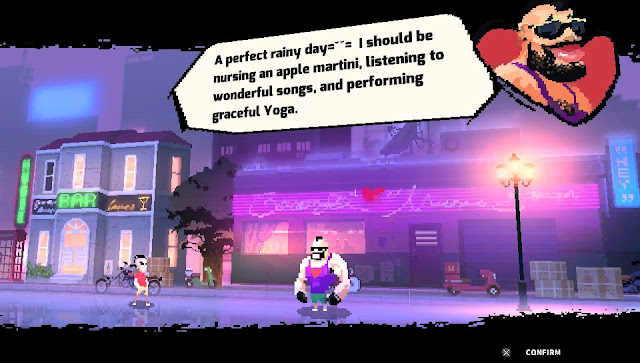 At your disposal are a range of kicks, punches, charges, mighty leaps and some special EX-Skills plus critical attacks, but there are no weapons to pick up. Instead, your main aim is to build up massive combos, ideally done by lining up three or more enemies in a row and pummeling them all at once. In the air you have ludicrous skills and can juggle enemies across the sky or bounce them into the scenery to great effect.

By the way of extras, there's challenge modes to overcome, and a smattering of hidden secrets to round out the trophies. For the expert pugilists out there, the game starts in Standard mode, and you unlock Hard and Critical difficulties.

I am the Hero looks good, with reflections off the wet roads in the opening levels, plenty of bright neon lights to illuminate the darkness. It doesn't take itself too seriously either, the hoodlums know they're in a daft game and pull silly faces, they have stupid cartoon weapons and animate well. However, compared to other versions it feels slightly jerky.

Across the levels there's the odd bit of street furniture to interact with or dodge, but not really enough to keep up the mad tone of the game, and the bystanders are a missed opportunity for some encouraging banter or vicious verbals. 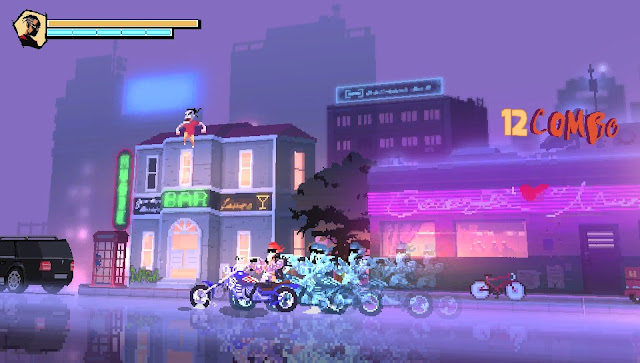 Complete a level and you can learn a new skill or choose another character to play as (you can swap them out during fights). In standard mode you can pretty much wade through most levels, with the odd soda can or pizza helping replenish your health.

The game definitely isn't quite as smooth as the original, and with five or more characters on-screen feels rather choppy. Enemy attacks vary from dumb to all over the place, which might suit the tone of the game, but fighting purists probably won't like the big boxer character endlessly pummeling at thin air rather than coming to attack.

Also, your attacks can be way past an enemy and still hit them, which doesn't feel in the spirit of the game. The ability to corral enemies into a corner and wipe them out in one go feels cheap too. Still, with plenty of variety and imagination (of the bad 70/80s cop series variety) going into the enemies, the game doesn't get boring. 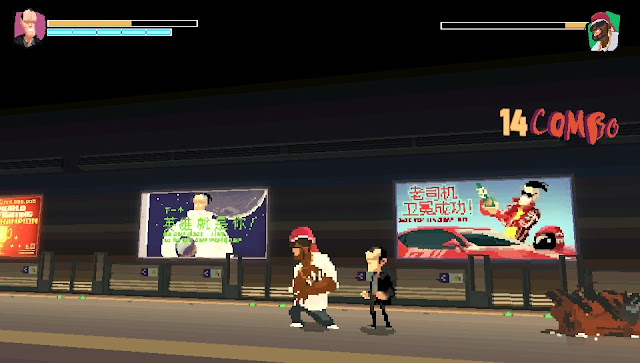 There's also some neat touches, like if you keep dying on the tricky lift level, which is easy to do, eventually it will let you survive the long fall to keep on with the battle. That, some new touches like the bomber drones and exploding chemical frogs, plus a curiosity to see what comes next should keep you going to the end. Yes, this is a pretty short game, but still worth having a crack at.