on November 02, 2018
Hot(ish) from the Dreamcast and NEO-GEO comes a fun and pacy shooter to warm up your arcade reflexes this winter. Fast Striker from NG:DEV.TEAM joins the Vita's rich list of arcade shmups including TxK, Velocity Ultra, Neon Chrome, DariusBurst and others with a rip-roaring 60fps blast spread over six stages, with four different ship/game modes.

At its default view, Fast Striker takes up a tiny window for crisp and clear original pixels in the middle of the Vita's screen. You can scale the view up to make things bigger but things appear less clean as you near full screen view, still playable though. In the background, raving dance anthems blast out as you dodge massive ships and endless volleys of fire. 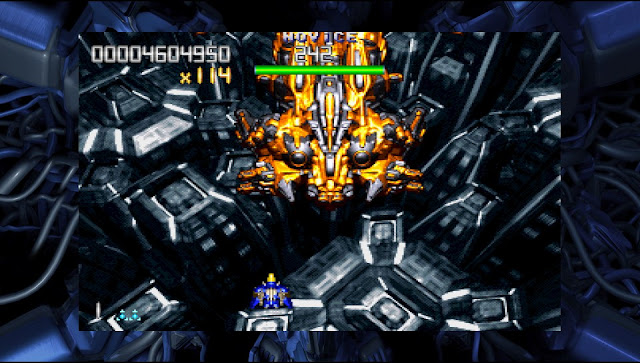 Your Fast Striker ship is nimble enough to weave in and out of the action, but when you start firing your vessel slows down, so careful use of the fire button is required. When enemies die, they drop tokens, which will gravitate toward your ship if you stop firing, creating some fun risk/reward mechanics. Shields (circle) help keep your craft out of a tight spot, or you can use them to crash through a fleet of enemy ships. Extra lives and a smattering of continues can help you build up the knowledge and skills to make it deeper into the game.

Below the battle, tiled industrial or sci-fi city scenes help set a dark tone for the game, and help make the bold-coloured incoming fire more obvious. One quirk is lots of different-looking tokens appear, they can look like enemy fire at first, some consistency or border colour would be helpful here, but you soon learn.

The real focus of the game is to get the highest score possible through chains, bonuses, accuracy and so on. A shame the high scores aren't online to give you something to compare your efforts to! The different modes, Novice, Original, Maniac and Omake (new for the PlayStation version) have different scoring systems and up the volume of firepower, as best demonstrated by the game's official screenshot page. 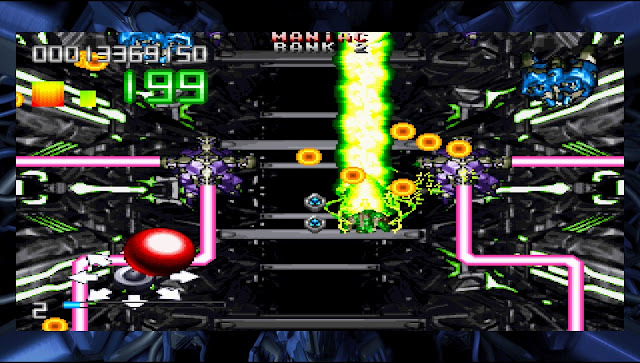 Also worth remembering is that you shoot behind you with the square button to take out any lurkers. Among all the chaos keeping a good line through the bullets is key to your long term survival, most times it feels more like luck than design, but somehow you can squeeze through many impossibly tight situations.

Its annoying there's nothing in the digital manual about what all the extras are. What's a "tech bonus" and who is the blue robot you shoot for extra tokens? Some context would be really helpful, with perhaps a few hints about what the game's secrets are. Still, if you like repetitive shooting, Fast Striker provides a quick blast of action, but perhaps lacks the sophistication of recent games, and it still isn't Ikaruga!