on September 25, 2018
All the comparisons for Super Mutant Alien Assault point to Super Crate Box (which hit the Vita as a PSM title). That's not a bad starting point, but SMAA certainly looks a step up in class, arriving on Vita a few years after the original Steam release.

After Earth is destroyed, humanity is spread in fleets across three galaxies, on the look out for a new home. Pursued by alien craft, while the humans sleep, robots are on patrol to defend from the aliens crawling out the walls.

Each single-screen level, built from a range of pre-set rooms, can be played in a number of ways. there's plain survival mode, pressure mode where you need to regularly visit a pair of pressure vessels to stop them from blowing up, reactor mode where you need to fuel the hyperdrive, Thruster has you carrying big balls of chemicals that mean you can't fire your guns, while an end of level vanquish mode requires you to defeat the boss to move onto the next set of ships. 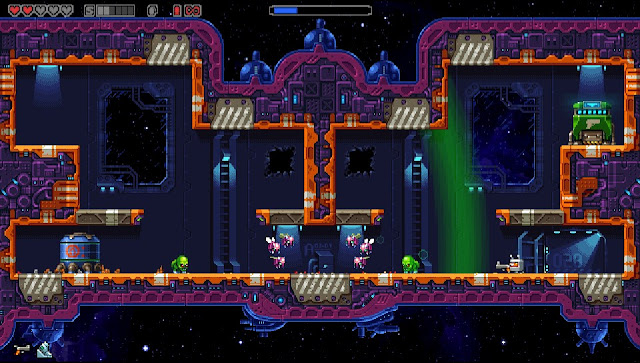 Each level has a few crates with a growing number of goodies or skills you can pick up. Double jumping, dodge and other skills will help you survive each level, while hearts give you a little more life.

There's also a weapons dispenser and other tricks, and here you get to play a bit with the game's mechanics. Blowing enemies up is easier than shooting them, especially with the mini-gun that takes ages to spin up, or the M-16 limited to a crappy 3-shot burst, grenades might not go where you want them, so learning the exact place to stand to dodge a leaping alien or to launch a weapon is key.

Targets are a range of aliens from green slime monsters to rhino-like charging creatures, swarms of bee-like things. The longer they live the tougher they get, so don't spend too long planning and get on with the killing. 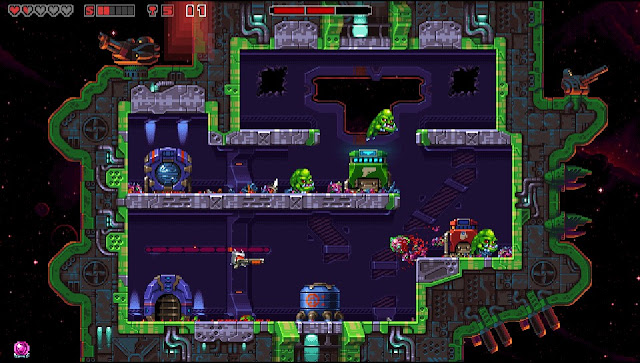 You also need to think about what weapon to end a level with. Having one round in an RPG is no good to start the next one, so in the few seconds before a level ends, you might want to try getting a new one.

As more weapons unlock, you can customise the starting load-out from a weak but reliable pistol to extra skills, and different types of bots. Ultimately, its down to luck and skill how long you last, but SMAA is thoroughly enjotable once you get the hang of it. 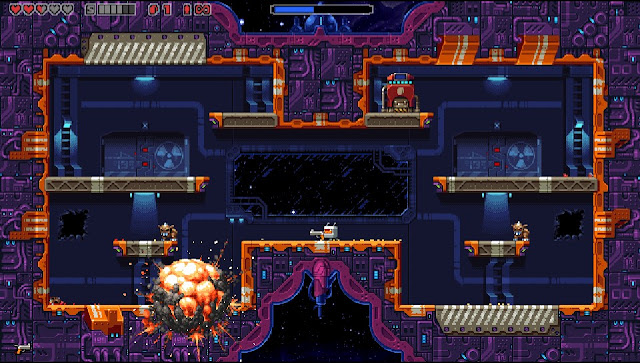 The need for all these little thoughts and how best to use your skills make the game come alive. That and the vibrant, brilliant pixel detail, in each area, driven by a beat-heavy soundtrack scream one-more-go after each and every death.

Once you complete the game, there's an endless mode for high score fun, and further difficulty levels for even more challenge. A finely nuanced game, its difficulty starts at tough and only gets harder, so learning every trick you can will help, especially against the fierce over-size bosses.