on September 26, 2018
Here we go adventuring on the Vita, except you're not the one having the adventure. instead interaction is limited to online chatting to someone trapped in a room, in the dark, on his own - very much against his will. That's not the only thing strange in Stay, the game keeps track of how long you play, or how long you leave this chap, Quinn, in the lurch.

The actual adventure elements are pretty basic, you have a few key phrase choices to make, either encouraging Quinn on, or urging caution as he bumbles around in the dark finding all sorts of mysteries. As you talk, you affect Quinn's mood and little measures for sanquine and other long adjectives fill up on the left hand side, hopefully for the good, but it doesn't make much sense. 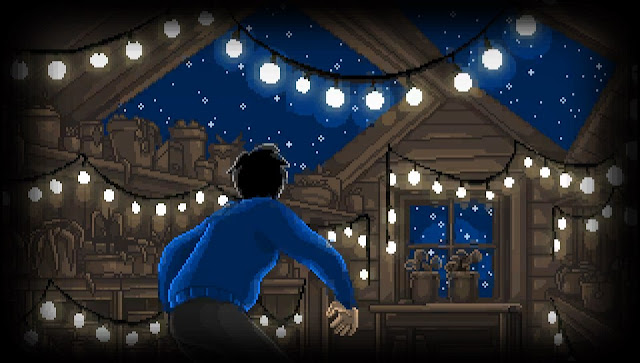 Puzzles make up the rest of the game, and here we take control of the action, trying to put back vases together, solve block-type brain teasers and much more. The wall puzzle and chess games are just bizarre, and not helped by the strutting peacock or other diversions!

Other times you watch on during interludes as Quinn explores, perhaps quietly screaming at him to do something logical (if its dark and you're on the roof, wait until daylight, moron!).

Along the way Quinn picks up a menagerie of animals, because why not? And some items, which might come in use later on. With no guide to the puzzles, unless you cheat, that's where you will spend much of your time struggling, and once you've found a route through the game, I don't think there's much more joy in trying other ways out, or trying to empathise more (or less). And if you don't like Quinn, his back story won't be of any interest as the game progresses. 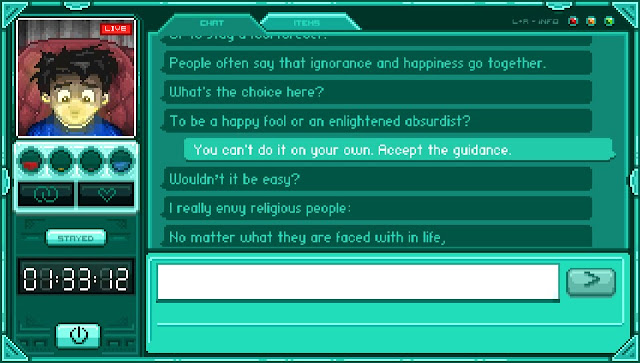 I'd like to love the idea behind Stay, but the execution is pretty ropey in places, and there's only so much fun chatting to someone on a keyboard. This from someone who hates using WhatsApp! A shame as the music is gorgeous and the early going can suck you in. As one of those games best played in the dark on headphones, its a shame it doesn't demand your attention until the end.

Ironically, as Night Trap comes out on the Switch, I was wondering if that would make a better text-type adventure? With more, slightly bat-shit girls to engage with, it could work. But stuck with Quinn, I'm not feeling the love, and I'm pretty sure he doesn't.