on September 10, 2018
I'm still annoyed no one ported Ikaruga over to the Vita, but we've had plenty of great releases over the years to satisfy those shoot 'em up urges. Joining the hopefuls is FullBlast, a smart-looking Ouya and PC 3D shooter from UFO Crash, ported by Ratalaika.

Relatively slow-paced, it sees your chubby little craft setting out over a 3D world to defend it from alient attack. There's an American flag over your base, but no land marks to get your patriotic blood running, surely some mistake!

Your aim is to deal death to waves of alien invaders. Some sit on top of the buildings, others have crashed into them denting the scenery, but most waves potter in from the edge or top of the screen in three or four ship groups. Their fire patterns are predictable, and butterflies are the only ones that drop power-ups, so focus on them. 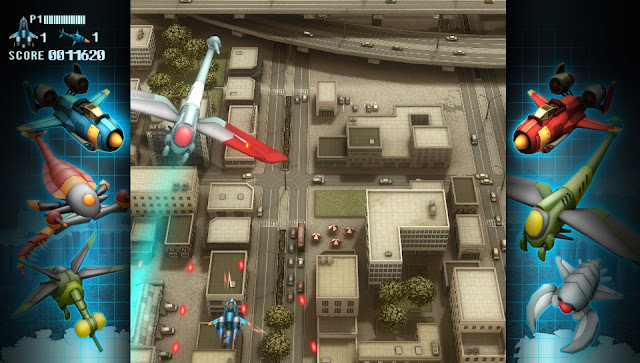 The combined firepower is constant but hardly anything you would call bullet hell. Even the bosses are at best sturdy, rather than awesome nightmares, and with plenty of extra lives, power ups, boosts and mega bomb pick ups, you can generally out-muscle the enemy forces.

A chunky metal soundtrack rattles away in the background and the effects hide under that, music is on or off only, with no volume control, so you need to turn the music off to really get the effects. Even then, explosions are chunky, but gun effects are rather bland with only a few other bleeps and bloops, making it all rather bland.

With a platinum trophy easily earned by the time you complete level three, there's still more than three-quarters of the game to go, across jungle and icy terrain, which seems rather unfair. On the plus side, the landscape gets more alien as you progress adding an eerie sense of foreboding.

As you charge up your weapon to max, you can fire missiles too, which partnered with some megabombs and a shield allows a well-tooled-up ship to crash through most levels easily enough. To spice things up from time to time, the game kicks in a 3D rotation mode which makes things a little more exciting. 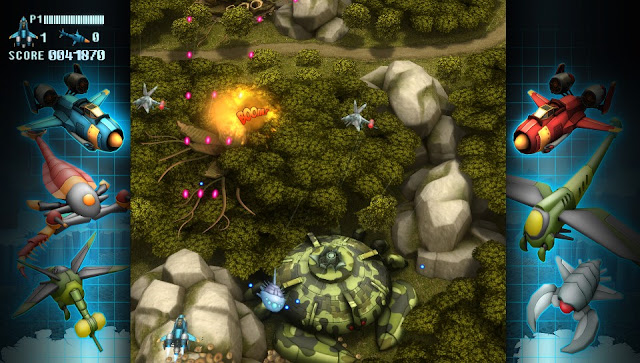 There is an online scoreboard to compare your efforts, in easy, medium and hard more, and some internal rewards, but it feels tacked on like an extra, rather than a core part of the game. Some side missions or an accuracy score, or anything really would help out here.

What's really missing is interaction with the 3D landscape, where's a bomb button to flatten the ground targets? Where's the enemies being shot down and plowing into the car-filled streets? Anything to make this game a more interesting shooter. One boss comes out of holes in the ground but it would be so much better if, for example, you could jump into the tanks that are defending the nation on some levels and change the perspective a little.

This is a decent shooter, with a modest challenge. But with a little imagination, the developers could have made FullBlast so much more exciting. Hopefully they can push a little further next time with a more ambitious project.