on September 12, 2018
Vita sales dropped another 100 down to 2,348 last week in Japan according to the latest Media Create data. That's in trend with previous years' late summer performance. There are no Vita titles in the games chart, topped by an impressive performance by SpiderMan selling 125K on PS4.

Things perk up over the next couple of weeks with NG Spirit Horror out this week and
Steins Gate Elite out the following week. How they'll cope among the AAA releases and general move to Switch likely means reduced sales all round. 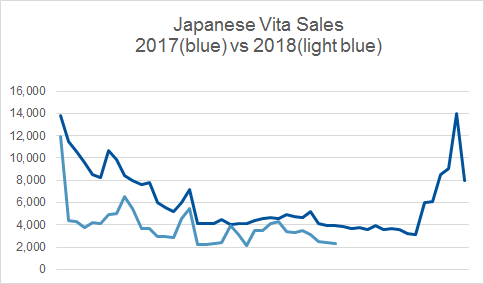 In Famitsu land, that very same Steins Gate Elite scored three 8s and a 9 for a total of 33, but with Tomb Raider, SpiderMan and others scoring higher, I wonder if Japanese gamers will focus on the western releases over this latest dive into the SG universe.
chart data famitsu media create ps vita sales steins gate elite review