on July 12, 2018
Wow, way to go with the love/hate thing. On first load, Super Destronaut DX welcomes us with sharp retro polygon front-end screen offering a bunch of fun-sounding game modes. But, select one, and a giant purple/brown turd of a spiral transition wipes the screen, and I feel rather sick about the whole thing, eeeeew! That's officially the worst effect I've seen on a Vita game, but moving on...

The Battlezone-style landscape you first see in any mode is rapidly filled up by your usual alien invader fleet, wibbling across the screen. A few new weapons aside, it could be 1980 all over again. The game modes vary your objectives, but essentially, you shoot wave after wave of mildly animated aliens, ramping up a multiplier.

As they fall, you can shoot grey wrecks for more points, and need to dodge any wreckage that lands as it drifts down the landscape at you. It's a big shame that's all the landscape is used for, some ground based targets or a sub-game would be great fun! 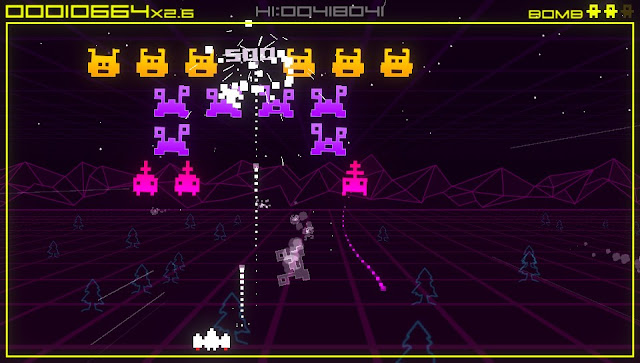 Weapons including lasers, rockets and bombs are gained when shooting the orange larger alien, usually tucked away at the top of the fleet. These are vital for passing most of the challenges, but since it is down to the luck of the draw on what aliens appear, some you just won't pass until the right fleets appear. At least each level ends with a better jazzier, transition than that first turd-athon! 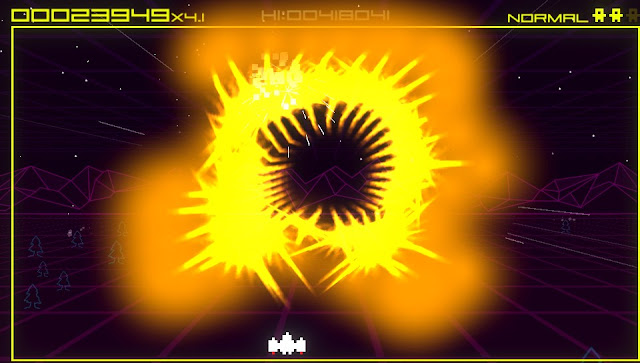 Enemies fling rockets and missiles at you at various angles, so there's a few patterns to learn, but really this is a five minute joy-ride at best. As with many Ratalaika games, it throws trophies at us, and you can easily gain another Platinum before breakfast, and you don't have to complete the game to get it - boo!

With online scores, there's a little extra challenge, but the game is decidedly lacking in that DX-factor. The Barry Dunne provided voice work does add a neat touch, among a smattering of pixel effects, and there's hardcore mode for masochists. But everything else should be ramped up a few notches to make SDDX stand out more.

Note, unless it is well hidden, our version lacks multiplayer, despite what it says on the Vita PSN page.