on May 16, 2018
This is one of those mornings! Wake up, check phone - Twitter activity spinning like mad! Which means either someone very famous has died or Sony is making another effort to kill off the Vita.

Turns out its the later, with news that western Vita game card production will cease at the end of March 2019, with all orders needing to be in by June this year. This is just the latest step Sony is taking to move on from Vita, and with reducing numbers of physical releases, it isn't much of a surprise. It looks like we have another year of game cards, then another year of hardware production, perhaps.

For the mainstream gaming press its time to run out yet another "Vita is dead" story (unironically unaware that 20 such stories in five years is sort of self-defeating). For Vita fans, it's another "Sony, you heartless bitch!" moment. But, Sony stopped caring long ago, and presumably, the economics are starting to count against us. 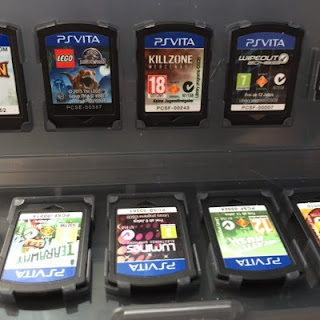 On the positive side (thinks a bit, scratches head, stares into coffee):
So, the game isn't over, and never will be. Personally, being a perma-broke gamer, I've relied mostly on PSN sales and second-hand games for my Vita fun, so I'm not doom-and-gloom about this.

Online there's the usual amount of angst, but people will get over it when the world fails to end and we all move on.