on May 16, 2018
I guess the success of Splatoon has compelled developers to go all Art Attack on their games. That's the impression with Inksplosion, but, unlike most art, the colour splodged all over the Vita's OLED is just for gaudy show and has no impact on the overall creation. Apart from, perhaps, being the visual equivalent of asking gamers to play a high-focus shooter while suffering a migraine?

A simple game, Inksplosion has you hold down the right trigger to shoot whatever random gun the level gives you, aiming with the left stick, and moving using the right. That's while dodging the oversize bullets coming the other way from four eight-bit-art-style creatures that live in each level. Each type fires a different weapon, some fast, slow, random or homing, all to be dodged.

Laser fields should be avoided, with your health bar depleting per hit and going back up when you kill an enemy. You can use the left trigger to slow down time and avoid the enemy bullets at the expense of some health, so only for use in emergencies.

I do like the bleepy tunes and the calm voice in the game, but while it looks cool in screenshot form, in action, its all a bit messy. It is easy to lose track of your "ship" and after a few levels chaos reigns.  yes, you can turn it off, but in that case, what was the point? Most Vita games are fine in short bursts, but Inksplosion is only worth a few minutes play a day, with no grab factor to keep you going. 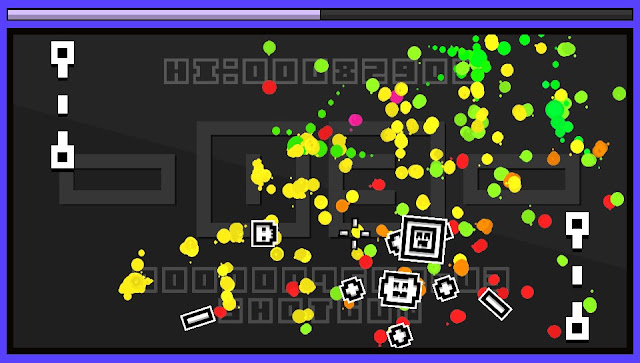 And that's it, really! The weapons take a second or two to figure out a quick tactic, and you will learn how best to dodge the laser fields in no time at all. Your multiplier goes up the longer you avoid getting hit, but it would be so easy to add a few more modes to make this game something more substantial.

Arena mode does away with the laser grids and speeds things up a bit, with rapid level switching, but not much. Making the score unreadable is not helpful! And tougher mode isn't really needed, for a game that throws silver and gold trophies at you, including a one-hour Platinum if you're lucky, as if to apologise for the lack of game. If you want an arcade shooter, try Son of Scoregasm that does all this a hundred times better!

Many thanks go to Ratalaika for bringing a steady stream of fun games to the Vita, with Devious Dungeon, One More Dungeon and the like helping keep the roster alive, but this is perhaps setting the bar a touch too low.

UPDATE: A recent patch allows players to disable the ink splats, basically the game's main feature. On the plus side, it makes gameplay a lot smoother and the game much easier to play, and finish in next to no time!