on May 23, 2018
You know it's a quiet week in gaming when a Caligula title hits the No. 1 spot in Japan. The updated PS4 Overdose edition manages the feat with just over 20K sales on the Media Create chart. For the Vita, Pro Jikkyou Baseball continues to fly the flag, sticking in the top 10, selling another 4,000 copies and taking the title to 83K retail sales. Which is why Japan will make Vita game cards for another year or so, after western card production ceases in 2019.

Hardware sales are flat on last week, with the Vita selling almost exactly the same at just over 2,200 units? Will 2K be the new 4K across the summer as Sony's portable drifts off into the distance and the bottom of my chart?

Talking in Japan, SIE's CEO John Kodera says he is considering various options around the PS Vita, while hinting at end of life in 2020 with the PS4 not far behind. Considering the Vita arrived around the same time as the iPhone 4S, and we're now up to the X model, that's a staggering length of time for a portable games console in the mobile annual-upgrade era.

Make of Sony's words what you will. A budget Vita, a PS4-badged remote player or will the PS5 come with a standard DualShock, but offer a 4K/5G Remote Player screen/controller to appeal to the Switch crowd? 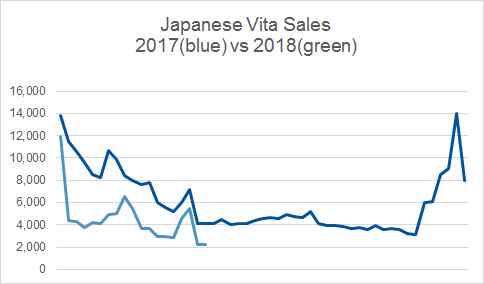