on May 09, 2018
Golden Week definitely isn't what it used to be for hardware sales in Japan, but this year it managed to give the Vita a healthy spike to 5,500 units. That's up almost 1,000 on last week and is probably as good as life gets for Vita sales until Christmas, assuming Sony doesn't wave a PS4 Portable at us for E3.

In the Media Create chart, Konami's Powerful Pro Baseball 2018 is still the only Vita game in town, shifting 15,867 copies last week to move to a healthy 74,303 overall. 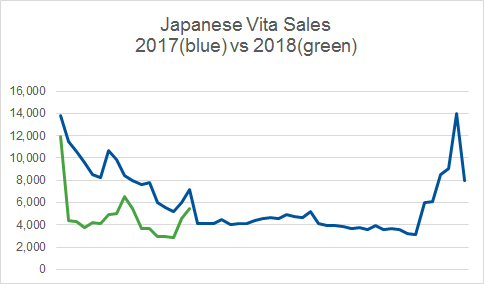 Next up are the Persona 3 and 5 Dancing Moon/Star Night games at the end of the month which should make a healthy impression on the chart.