Vita sales shoot up in Japan

on March 07, 2018
Not sure why yet, but the Vita sold over 6,500 units last week in Japan, beating sales of the PS4 Pro and the 2DS LL! There were no new Vita games in the Media Create chart, so perhaps there was a sale on to generate those extra 1,500 units over the previous week. Or, maybe lots of PS4 owners want to remote play Monster Hunter World, which has sold 7 million copies WW and 2 million in Japan!

Enjoy the good news as it lasts, with the Switch and PS4 romping ahead. Dragon Quest Builders arrived on Switch at No. 2 selling 28,400 copies compared to Vita's launch sales of 178,016 back in 2016.

Or, perhaps lots of gamers are getting ready for Four Knight Princess Training Story (NIS) out this week or Attack on Titan 2, out next week. Seems unlikely, given that AoT2 looks way better on every other device and FKPTS is also on Switch, but you never know! 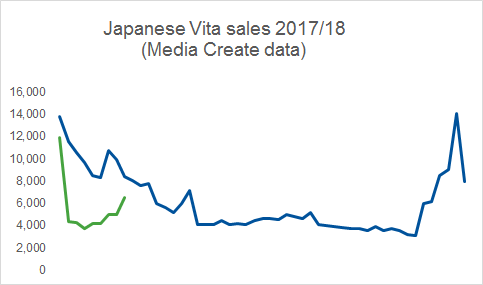