on March 07, 2018
I'm naturally suspicious of a game that gives you a silver and gold trophy just for your very first move! And to grab a platinum in under an hour, that smacks of someone trying to sell their game as an easy set of achievements.

Ignoring that, Midnight Deluxe, a sort-of-successor to 36 Fragments of Midnight, is an illuminated game of touchscreen golf, trying to flick your glowing cube (actually a fairy|) into a target hole. Your shots must overcome natural landscape obstacles, pointy fences, whirring saws, smiling fluffy monsters and lasers - the usual golf course hazards. 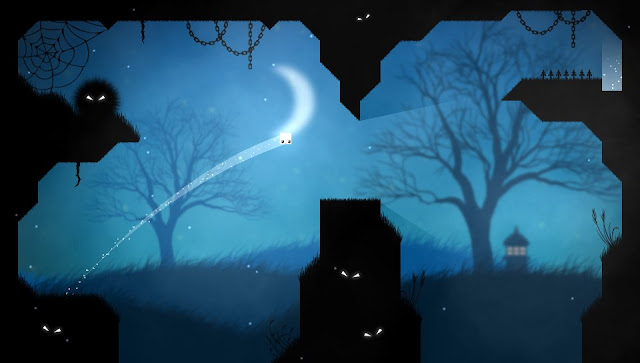 With no story, plot or cutscenes, you play Over 70 levels, each a single screen, aiming to finish in the least amount of shots possible. That's tricky as the touchscreen controls lack the sensitivity required to play well. You can do full power or little chip shots easily, but anything mid-range is in the lap of the gods. On some levels, you need to take repeated shots quickly to avoid rising spikes or moving objects where the game becomes pure pot luck.

The challenge does ramp after the 40th level, when you get the platinum! Diving through laser grids and multiple switches add to the challenge, but progress does feel more like luck than skill. Even so, Midnight Deluxe is deeply lacking in ambition,

Petite Games have failed to provide any secrets to find, no variation in colour scheme, no bonuses, no nothing! Sure, its cheap, and a spot of exclusive fun for Vita and Switch owners, but not even a level designer? What exactly is Deluxe here? Okay, the game is a package of a couple of older PC games, with some extra levels tacked on, but it still feels mighty empty.