on December 28, 2017
The Vita sold 14,041 units in Japan, according to Media Create figures, a numeric palindrome to celebrate its best figures of the calendar year! Again, sales are around a quarter of what they were week-on-week in previous years, but that's still a healthy amount of hardware until you see the Switch sold over a quarter of a million units last week alone, and 500K in two weeks.

Even so, the word "viable" is all we need to hear, and for Sony to pay the slightest bit of attention as the Vita has a solid roster for 2018, as the PS4 continues to get caned by Switch. 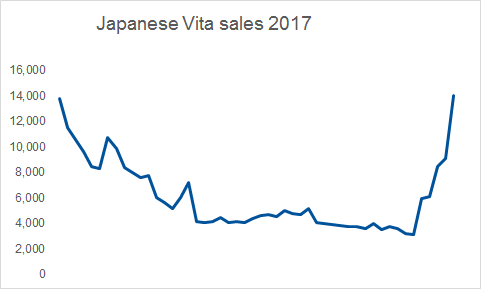