Vita sales on the up in Japan

on December 06, 2017
Could the comeback be on? While the Switch manages to sell 125,000 in Japan last week, Vita sales stormed past the 6K barrier to 6,127 units! That's thanks to seasonal sales, which while still poor compared to previous years should convince developers that the Vita will be viable in 2018. Spring still looks pretty strong for the Vita in Japan with new games being announced daily.

Unfortunately, while Switch games boss the Media Create chart, there are no Vita games to be seen in the top 20. Over in Famitsu land, Bandai's Digimon Story: Cyber Sleuth Hacker’s Memory on PS Vita and PS4 grabbed a feisty score or 9/9/9/8  for 35/40 to be the best-rated game. It lands in Japan next week, so could make an impact. 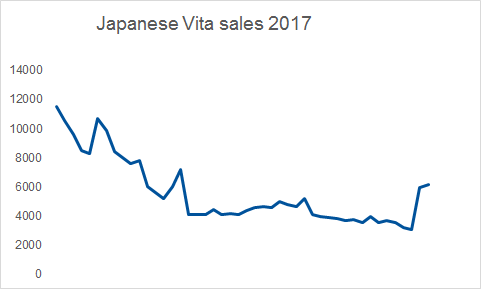